December 1995, June 2001
MassGIS scanned the 1:24,000 USGS topographic quadrangles to create a digital database that can provide images of the paper maps. 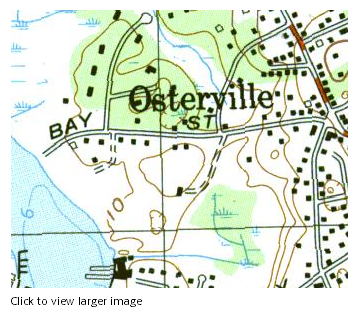 In ArcSDE the images are stored in a Raster Catalog named IMG_USGSQUAD. In addition, a mosaic is stored in ArcSDE as IMG_USGSQUADM.

The USGS has introduced a new generation of topographic maps. See the US Topo program for details.

The data are freely available in three forms:

The paper maps were converted to image format by scanning. Unfolded USGS quadrangles were used if available. The maps were scanned with a Tangent CCS500-50TF drum scanner into 8 bit compressed TIFF images. 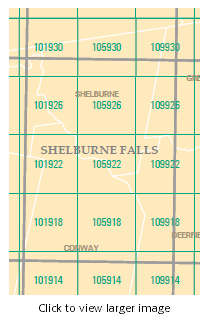 The original 4km x 4km images (produced in 1995) were scanned at 250 dots per inch (dpi). Each scanned quad was registered to MA State Plane NAD27 in ARC/INFO with the REGISTER command. After registration, the images were converted to grids. In Arc's GRID module they were then clipped of map marginalia and merged with neighboring sheets. The resulting grid was projected into NAD83 MA State Plane meters. Afterwards, the grid was clipped by a DOQ template and each clipped grid was converted back into a TIFF image. The quad images are stored with the DOQ tiling scheme to facilitate storage of the images and allow for faster drawing times for local map extents. The image name is an index sheet-ID composed of the first three digits of the x and y NAD83 state plane coordinates of the image's lower right corner, prefixed by the letter 'q'. For example an image that covers part of Northfield, MA, with lower right corner coordinates of 125000m 983000m, is named q125983. See the index map. 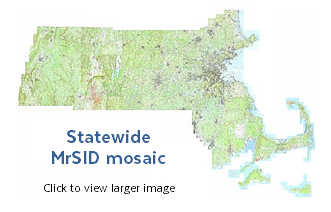 The same paper maps were scanned for the seamless statewide mosaic image, but at 500 dpi (in late 2000-early 2001). Because of their large file size the scans were registered directly to the NAD83 MA State Plane meters coordinate system instead of to NAD27 and projected. The images were converted to grids and then clipped of marginalia, merged with neighboring sheets, cut into the DOQ Index-tiled 4km x 4km blocks, and resampled to 2-meter pixel resolution. The grids were converted to Tiff images and fed into Lizardtech's MrSID Geospatial Encoder 1.4 to produce the statewide mosaic. The MrSID software requires that all images included in a mosaic have the same pixel resolution. In order to achieve the best image quality, rescanning all the maps at 500 dpi and resampling to a consistent pixel size (2 meters) was chosen over resampling the original 1,600 250 dpi images, which have slightly varying resolutions (approximately 2.5 meters). The images from this second scan of the maps were used to create the ArcSDE mosaic layer IMG_USGSQUADM (in March 2008).

MassGIS does not sell or distribute paper copies of USGS Topographic maps. Images of these maps, of multiple vintages and with full marginalia, may be downloaded for free from the USGS topoView website and the USGS Historical Topographic Map Explorer.