This layer is a digital raster graphic of the historical 15-minute USGS topographic quadrangle maps of coastal towns in Massachusetts. These quadrangles were mosaicked together to create a single data layer of the coast of Massachusetts and a large portion of the southeastern area of the state. Cellsize is 5.4 meters. 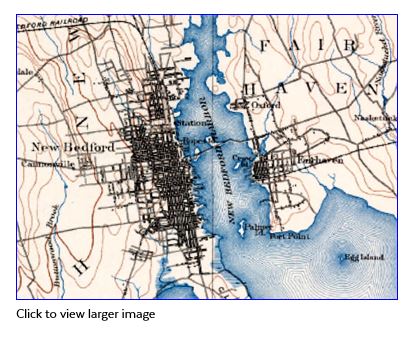 The Massachusetts Office of Coastal Zone Management (CZM) obtained the map images from the Harvard Map Collection. The maps were produced in the late 1890s and early 20th century at a scale of 1:62,500 or 1:63,360 and are commonly known as 15-minute quadrangle maps because each map covers a four-sided area of 15 minutes of latitude and 15 minutes of longitude. A digital raster graphic (DRG) is a scanned image of a U.S. Geological Survey (USGS) standard series topographic map.

In ArcSDE the image is named IMG_USGS_HIST_COASTAL.

Production of this Digital Raster Graphic (DRG) began with the scanning of the paper 15-minute topographic map on a high-resolution scanner (Betterlight, Super8K2 scanning back camera and ViewFinder 5.x capture software). Maps were photographed at a copy stand. A vacuum easel was used to keep the maps flat during photography. The imaging specification was designed to produce detailed "Archival Master" images that, to the extent possible, are faithful reproductions of the originals, and that allow for highly detailed screen reproduction and print reproduction at up to 1:1. Files were edited in and saved from Adobe Photoshop CS. When possible files were batch processed using an "action" script derived from edits applied to match a representative sample. Color and tonal corrections were made using Curves, Levels, and Hue/Saturation filters in Adobe Photoshop. Image files were viewed on a calibrated monitor. Editing was performed in an ISO 3664 compliant proofing environment. Master Image files were corrected and archived as TIFF files (compliant with the TIFF 6 Specification) in the sRGB IEC611966-2.1 color-space. Files were saved with an embedded profile. The colorspace tag is used to assure that color and tonal information is properly displayed across multiple systems and media. Image resolution is of sufficient quality to render all meaningful map details on screen and in print; Format is 24 bit Tiff, uncompressed; Tone/color reproduction: embedded ICC (International Color Consortium) profile with associated size and tone reference. Quality control: visual inspection, MD5 checksum for 100% of images.

MassGIS distributes a MrSID version of the data, compressed at 20:1 from the tiff image mosaic processed at CZM, and hosts a tile service at ArcGIS Online (see links at the top of this page).

CZM maintains the datalayer. No updates are planned. For more information please contact: