This layer has buffer areas that represent the minimum setback requirements for the installation of septic systems near specific natural resources and water features for the purposes of Title 5 (310 CMR 15.00). 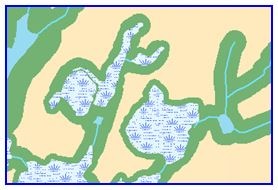 The Title 5 Setback Areas datalayer contains polygon features representing variable width buffer zones around water features and other natural resources. These setback areas are established for the purpose of aiding in the implementation of Title 5 (310 CMR 15.00) regulations for the siting, construction, inspection, upgrade and expansion of on-site sewage treatment and disposal systems, and for the transport and disposal of sewage. The buffer areas represent the minimum setback requirements for the installation of septic systems near specific natural resources and water features. Please refer to 310 CMR 15.00: The State Environmental Code Regulating Septic Systems (Title 5) for the specific setback requirements.

The name of the Title 5 Setback Areas feature class in the MassGIS enterprise geodatabase is TITLE5_POLY.

The Massachusetts Department of Environmental Protection (MassDEP) developed this data for mapping purposes only. The Title 5 setback features maintained in this layer represent the minimum setback distances for only a subset of the setback requirements specified in the Title 5 Regulations. The Title 5 setback areas in this layer are built by buffering the hydrologic and wetland features contained in the MassDEP Hydrography datalayer and wetlands features from the datalayer. The buffer area is 25 feet around hydrologic features and wetlands, except for those features that fall completely or partially within a Zone A surface water supply protection area, where the buffer zones are 100 feet around wetland features, 200 feet around streams and ponds, and 400 feet around a public surface water supply reservoir. The areas of wetlands and hydrologic features that are buffered are removed from the buffered area.

In July 2006 buffers were added around intermittent streams within Zone C's.

In July 2007 updates were made to the MassDEP Hydrography and SWP Zones data where the reservoir outlines were matched to the MassDEP Wetlands. All of the Title 5 buffered areas statewide were regenerated, and the wetlands and hydrologic features that were buffered were removed.

In May 2017 the Title 5 Setback Areas were regenerated statewide to incorporate the March 2017 updates to the MassDEP Hydrography and April 2017 updates to the SWP Zones and SWP Watersheds. NHESP certified vernal pools were added to the Title 5 buffering. The INSIDE attribute field is no longer supported and was removed from the layer’s attribute table. The previous watershed tiling scheme was replaced by a statewide datalayer.