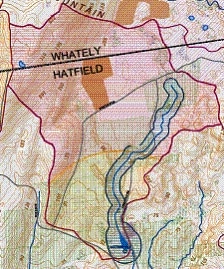 All active and inactive surface water supplies have zones delineated, but some may be covered by other legislation. MassDEP protection Zones A, B, & C are in effect at MWRA sources and are subject to the protections in 310 CMR 22.00. MWRA has additional protections for their reservoirs that are included in the Massachusetts Watershed Protection Act, MGL 350 CMR 11.00. Watershed extents for all surface water supplies including active, inactive, emergency, sources outside of Massachusetts, watersheds that extend into other states and watersheds of sources from other states that extend into Massachusetts are included in the datalayer SWP Watersheds. Surface water intakes on Class B Rivers are not included in either datalayer. The reservoir features were taken from the datalayer and removed from the Zone A and B features and added as a separate feature. For MassDEP's regulatory wording of these zones please see Water Supply Protection Area Definitions.

Those areas that contribute to public surface water supplies were originally taken from the USGS Drainage Sub Basins datalayer and overlaid with the 1:25,000 Hydrography datalayer to identify reservoirs and tributary streams. The reservoirs were extracted and buffered to produce Zone B’s, reservoirs and tributaries were extracted and buffered to produce Zone A’s, and sub basins were extracted to create Zone C’s. Starting in 2003, the DEP GIS Program began using the elevation control points and breaklines from the 1:5,000 Digital Orthophoto Project to create a digital elevation model of a surface water supply watershed, and using the ArcHydro Toolset developed by ESRI and the University of Texas GIS Water Resources Consortium delineated watersheds digitally.. These basins were then field checked by MassDEP Drinking Water Program staff and edits made when necessary. Additional streams were extracted from the datalayer, added to the USGS 1:25,000 Hydrography datalayer and buffered to create extended Zone A’s. This work is ongoing and is about 35% complete, with watersheds prioritized by perceived accuracy or if threats to the watershed are identified, with work now progressing in Essex County. Please refer to the delineation type and date fields to see which watersheds have been processed. In addition to this in 2007 the reservoir polygons were extracted from the DEP Wetlands 1:12000 datalayer and used to modify the Zone A and B buffers, and were added to the USGS 1:25000 Hydrography datalayer to allow it to accurately align with the buffer zones. While many of the watersheds are based on USGS Drainage Sub Basins, no attempt has been made to align the existing sub basins with the terrain delineated watersheds and zones, including errors in major basin divides. The attributes relating to water supply zones in the existing USGS Drainage Sub Basins have been removed.

Protection zones are unique and complete for each source and can be selected by using the item SOURCE_ID. Sources that are contained within or overlap the watersheds of other sources will have part of their Zone C removed when it coincides with the Zone A or B of the upstream source, and some sources may have no Zone C because the watershed is entirely Zone A or B. Some sources may have no reservoir because there is no impoundment or the impoundment is too small to be mapped. Discontinuous Zone C features have been combined into a single multipart polygon feature. Summary attribute information for the Zones is contained in the SWP Watersheds datalayer, and detailed information about the source is contained in the Public Water Supplies datalayer.

The attributes for each feature are:

Since all of the features are contained in a single datalayer and the features contain overlapping areas, the use of the Symbol Levels feature under the advanced options dialog in the symbol editor window will ensure that the zones draw in the correct order. The preferred order is: Zone C, Zone B, Zone A, Reservoir. To do this open the Layer Properties window, choose Symbology Tab, select Categories > Unique values and use the SWPZONES attribute, symbolize the features in the preferred order, the select the Advanced > Symbol Levels tool in the lower right, order the features in the preferred order and check the box next to 'Draw this layer using the symbol levels specified below'.

The Massachusetts Department of Environmental Protection (DEP) GIS Program is maintaining this datalayer. Any updates sent to MassGIS will be forwarded to DEP and incorporated into this data layer. Please reference the town, water supplier ID, water supply source ID (if known), and major basin identifier when providing updates.

January 2009 – Zones updated for all sources in Danvers, Ipswich, Manchester, Gloucester, Rockport, Newburyport, Haverhill, Amesbury, Andover, North Andover, Wakefield, Winchester, Burlington, Concord, Leominster, Lincoln and Greenfield, and Fitchburg sources 01S, 06S and 09S. Sources in Cambridge (Waltham) and the Ware River Intake were edge matched and features added for adjacent zones newly delineated. Features were edited in Peabody, North Brookfield, and Amherst. Worcester sources and the Wachusett Reservoir watershed are included in this update as preliminary, they have not been field verified except where the watersheds adjoins Leominster and Fitchburg watersheds. In March 2009 one duplicate polygon was removed.

In March 2010 the following updates (completed in November 2009) were released: Zones were updated for all sources in Ashburnham, Gardner, Fitchburg (North), Hudson, Marlboro, Milford, Westborough, Winchendon, Cambridge, Abington, Attleboro, Braintree, Brockton, Fall River, Falmouth, Hingham, Holbrook, New Bedford, Randolph, Somerset, Taunton and Weymouth. The zones for Worcester sources and the Wachusett Reservoir were edited and are now final. The zones for Upper Naukeag Lake in Ashburnham were restored, as they were inadvertently removed from the previous version because the lake is now a source for a joint water authority between Ashburnham and Winchendon, using the existing Winchendon intake. The Ashburnham intake is now considered an emergency source until it is officially abandoned.

The watersheds delineated here were done using the best available methods and data at the time of their creation. No subsurface water movement of any kind was used in the delineation process. There may be local statute or other data that show other areas considered as contributing or areas shown here that are considered as not contributing to the drinking water reservoir watershed. If you feel any of this data is in error, please contact the MassDEP GIS Program at Kashif.Rashid@mass.gov or 617-292 5851 and provide any data to support your claim, preferably in digital form.