The data were developed through a competitive procurement funded by MassGIS. Each community in the Commonwealth was bid on by one or more vendors and the unit of work awarded was a city or town The specification for this work was Level 3 of the MassGIS Digital Parcel Standard.

As of July 24, 2020, with the addition of data for Boston, standardization of assessor parcel mapping has been completed for all of Massachusetts' 351 cities and towns.

MassGIS has assembled information and resources for those interested in maintaining standardized parcel mapping.

This layer replaces the legacy Level 0 and Level II parcels. 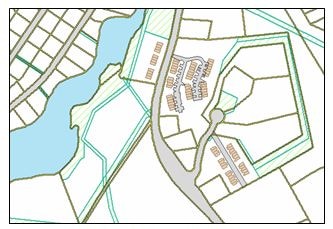 The standard establishes requirements for how parcel boundaries are compiled. It also requires creating a few attributes in the TaxPar and OthLeg feature class polygons that are unique to the standard. In addition, the standard requires that a minimum selection of information from the assessor's database be included in a separate database table that can be linked to the parcel polygons. Finally, the standard establishes very high percentage requirements for what percentage of parcels link to an assessor tax list record and vice versa.

One of the primary objectives in developing Level 3 in Version 2.0 of the digital parcel standard was revising the data model to eliminate situations in which one tax listing links to more than one polygon on the assessor’s map. Sustaining this approach will, ultimately, depend on embedding a unique parcel identifier from the standard (the LOC_ID attribute) directly in the assessor tax list database. Conversations with the four primary assessing database software vendors in Massachusetts indicate that embedding the LOC_ID in this manner can be accommodated in their existing database structures. It always has been necessary to link multiple tax listings with one polygon (the most common example being condominiums), and the standard continues to model that relationship.

The standard calls for data stored in an ESRI file geodatabase (FGDB) with three feature classes, a database table, and two look-up tables. These are all briefly described below and full details can be found in the standard. The components of the Level 3 FGDB are:

TaxPar Feature Class (“tax” parcels) – this feature class comprises polygons or multi-part polygons, each of which links to one or more assessor tax records (unless it is a feature for which a tax record has not been established, i.e. public right-of-way, most water, etc…). In situations where two or more contiguous parcels have common ownership, the internal boundaries of these parcels have been removed, creating a single polygon corresponding to the tax listing that it represents. Where two or more non-contiguous parcel polygons share common ownership, they have been converted to a multi-part polygon; each multi-part polygon links to one or more assessor tax listings.

Misc Feature Class– this feature class contains map features from the assessor parcel maps needed to produce that tax map with the content that the assessor is used to seeing, such as water, wetlands, traffic islands, etc. 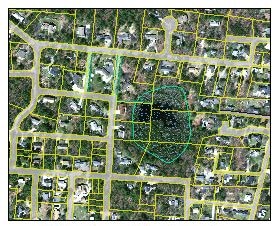 Assess Database Table – this is a standard extract from the assessor database containing about 25 elements including property valuation, site address, state use code, owner, owner address, and a selection of information about the structure. This table includes the FY (fiscal year) field, which stores the vintage of the assessed value of the parcel.

UC_LUT Look Up Table – this is a look-up table for state use codes found in the assessing extract.

In ArcSDE, MassGIS stores the components of this data layer as follows:

Complying with Level 3 of the Standard

Representation of Parcel Boundaries - Users of parcel data, which MassGIS has approved as meeting the requirements for Level 3 of its standard, may find places where the boundaries conflict with visible features on orthoimagery. This is common and reflects a variety of circumstances. Often the discrepancy between the tax map and the visible road right-of-way on the orthoimagery base map is correct, as roads are not always constructed the way they were shown on the original plan. Other factors accounting for discrepancies between the boundaries and visible features on the orthoimagery are buildings that may “lean” in the imagery because of camera angle, making them appear as if they are crossing parcel lot lines. Also, while rights-of-way ordinarily have a standard width, that is not always true. In fact, we have seen countless instances where right-of-way widths are irregular. Similarly, the fence, wall, or shrub line visible on the orthoimagery is not necessarily the property boundary. In some cases, houses are built so that they straddle lot lines. Also, while MassGIS' quality assurance process is extensive and rigorous, it is not perfect and it is possible that we have missed some boundary compilation or other errors. 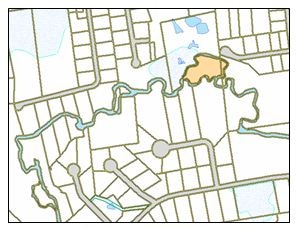 Municipal Boundaries - The standard requires that MassGIS’ representation of the official municipal boundaries be incorporated into the standardized assessor mapping. Checking for that is part of our QA process. However, there are discrepancies between municipalities where they share a boundary that follows a stream channel; without engaging the services of a surveyor, there is no way to determine where those boundaries are and we did not require that MassGIS’ mapping of that boundary supersede the boundary from the tax mapping. Also, MassGIS has allowed communities to represent the coastline as it is in their tax mapping. Finally, this requirement from the standard uncovered numerous discrepancies in municipal boundary lines that will require further discussion with the communities involved. Known outstanding boundary discrepancies include portions of the boundaries between the following communities: Andover-Lawrence, Lawrence-Methuen, Cohasset-Scituate, Attleboro-Rehoboth, Avon-Stoughton; Easton-Stoughton, and Dracut-Methuen.

Assessing Data Extract - The assessing data extract is an “as is” copy of the records maintained by each assessor. There are errors and discrepancies.

Assessing Data Match Rates - The standard sets very high requirements for the percentage of parcels that must match to an assessing record, as well as vice-versa. Full details are in the standard. However, these match rates were not always achievable. In some communities, assessors do not know who owns some properties. These are almost always small fragments of land with no structure or small lots in wetland or forested areas. The NO_MATCH attribute of the TaxPar feature class has been used to track these circumstances. Although much less common, there are also occasionally records from the assessing extract beyond the allowed percentage that do not match to a parcel polygon.

For each community, vendors delivered an ESRI file geodatabase to MassGIS. MassGIS staff reviewed the parcel boundary mapping, identifying potential errors.  Situations that were commonly called out in the boundary QA included lot lines running through structures, inconsistent right-of-way widths (unless the mapping was known to have been compiled from deeds and plans), discrepancies compared to visible features on the orthoimagery, and discrepancies relative to the official representation of the municipal boundaries maintained by MassGIS. Additional checks include: attribute names and domain values, consistency between “TAX” and “FEE” polygons included in the TaxPar and OthLeg feature classes, linking percentages from the parcel map polygons to the assessing data extract and vice versa, and review of situations where multiple tax records link to a single parcel and one or more of the tax records is not a condominium.

Complete descriptions of the attributes for the Level 3 feature classes, database table, and the look-up tables are found in the parcel standard. Attribute table fields and domains (valid values) and selected definitions are listed here:

These data are current to state fiscal years 2010-2021. The specific date for each municipality is listed in the popup for each town in the download viewer and on the L3 Parcel Fiscal Year Status Map.

MassGIS has assembled information and resources for those interested in learning more about maintaining standardized parcel mapping.

For questions or to submit municipal data for inclusion into this dataset please contact craig.austin@state.ma.us.