June 2019
These polygon data layers depict the boundaries of public school districts in the Commonwealth of Massachusetts. 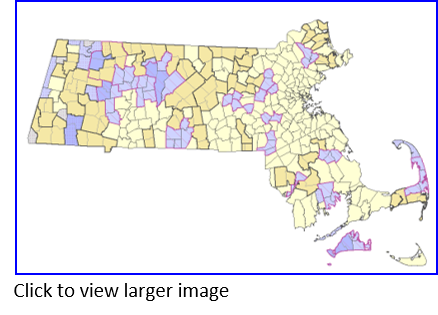 A school district is an administrative unit responsible for managing primary and secondary school services within a defined geographical boundary defined by one city or town or by multiple municipalities. District information, as of December 2018, was obtained from the Massachusetts Department of Elementary and Secondary Education (DESE).

A public school district consists of one or more public schools operated under the supervision of an elected or appointed school committee and a superintendent. The majority of school districts serve a single city or town, and are considered a department of the municipal government. Two or more municipalities can also join together to form a regional school district, which is considered a separate and independent unit of local government. A regional school district can offer all grades (PreK-12), just certain grades (for example, just elementary grades or just high school), or just certain types of instruction (for example, vocational and technical programs).

This feature class is named SCHOOLDISTRICTS_POLY.

This feature class is named SCHOOLDISTRICTS_CCUV_POLY.

This feature class is named SCHOOLDISTRICTS_RglTownLabels.

MassGIS created the geographic data in ArcGIS 10.3 software by selecting (and in some cases aggregating) polygons from the Community Boundaries (Towns) from Survey Points dataset. Communities that do not directly operate a school district are classified as non-operating and are not represented with individual polygons in this layer. The "non-op" towns belong to a regional school district (included in this layer) or pay tuition for their students to attend another school district.

Selected attribute data in tabular format were obtained from DESE and linked to the geographic features.

The nature of the single- and multiple-community districts results in extensive overlap between the different district types. For example, a city/town may operate its own local school district at some grades and belong to a regional district or tuition out its students at other grades, and at the same time it also may be a member of a regional vocational technical school district and/or a charter school district.

The 2019 update of this data recreated the school districts based on a Community Boundaries layer with a less detailed coastline.

The three code fields are not populated for the Superintendency Union districts.

Search the profiles of each public school district in Massachusetts at the Organization Search. Additional information not included in this GIS layer may be found and downloaded from there.

MassGIS maintains these datalayers and will update them based on regular updates from DESE.

Also see the Schools layer for point locations of PreK-12 schools in the commonwealth.