These layers were created using primarily the NRCS/MassGIS Soils data; the basic procedure was to classify potentially forested land into nine different categories based on potential average timber productivity. 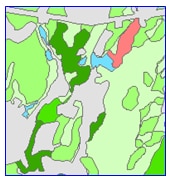 The project “Soil Productivity Mapping for Use in Forest Management” is a digital representation of work done previously in the Department of Natural Resources Conservation at the University of Massachusetts at Amherst. GIS data created for this project followed (where possible) the protocol established in UMass Research Bulletin #705 – Prime Forest Land Classification for Forest Productivity in Massachusetts.

Using primarily the NRCS/MassGIS Soils data, the basic procedure was to classify potentially forested land into nine different categories based on potential average timber productivity of white pine and red oak “…per acre per year at culmination of mean annual increment. Site index values are at age 50.” Other data sets were used to refine this classification, including aspect, land cover, riparian, slope position, wetlands, hydrologic soil association and unique areas.

With the January 2013 update the dataset is complete statewide.

The layer is named PRIMEFOREST_POLY.

The categories of potentially forested land are:

There was a minimum mapping unit of 5 acres for the project initially but when the project was recreated digitally, there was a minimum mapping unit of 0.5 acres. Potentially forested land included all land currently forested as well as abandoned farmland and unimproved pastures. A master list of soil associations was developed based on the timber productivity values listed above. There are 269 different soil associations in Massachusetts, 163 (60.6%) are hard wired into a defined category while 106 (39.4%) can go one category higher or lower. For these soil associations that are between prime forest categories AND on forested or open land, we would use slope, slope position, aspect, and riparian corridors to bump the classification up or down one category using NRCS “Hydrologic Groups” and this ancillary data. The rules developed for this process state:

The most important field in the database for this data is in the “PRIME” column. This classifies each polygon into one of the following categories (see timber productivity values above): The other item in the layer's polygon attribute table is ACRES, which stores the acreage of each polygon.