November 2019
This point datalayer shows the locations of more than 2,000 churches, mosques and synagogues in Massachusetts. 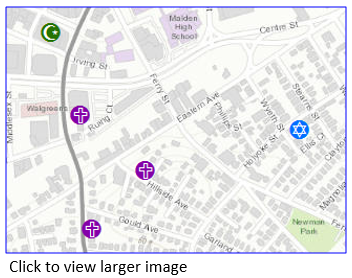 The layer is stored in ArcSDE and distributed as PLACES_OF_WORSHIP_PT.

MassGIS generated this dataset by address-matching (geocoding) lists of places of worship data to MassGIS Master Address Database (MAD) points. In cases where addresses did not immediately match to the MAD, development locations were manually refined using the most current Google imagery and other web sources.

The dataset is compiled from these sources:

The Mosques in this layer were obtained from the website of the Islamic Council of New England.

The Synagogues in this layer were obtained from the Synagogue Council of Massachusetts.

The Places of Worship datalayer's point attribute table has the following fields:

MassGIS maintains this datalayer and will make periodic updates based on information from the Councils.