The National Wetlands Inventory (NWI) from the U.S. Fish and Wildlife Service (USFWS) represents the extent, approximate location and type of wetlands, riparian, deepwater and related aquatic habitats in priority areas to promote the understanding and conservation of these resources. 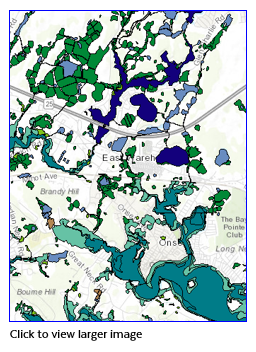 The NWI project was established to generate information about the characteristics, extent and status of the Nation's wetlands and deepwater habitats. This information is used by Federal, State, and local agencies, academic institutions, U.S. Congress, and the private sector. The Emergency Wetlands Resources Act of 1986 directs the Service to map the wetlands of the United States. The Act also requires the Service to produce a digital wetlands database for the United States.

MassGIS downloaded the data for the Massachusetts (dated 2020-10-01) from https://www.fws.gov/wetlands/Data/State-Downloads.html on November 12, 2020 and projected it to the Mass. State Plane Meters NAD 1983 Mainland coordinate system. 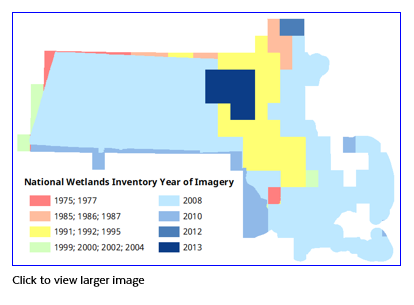 The National Wetlands Inventory - Version 2, Surface Waters and Wetlands Inventory was derived by retaining the wetland and deepwater polygons that compose the NWI digital wetlands spatial data layer and reintroducing any linear wetland or surface water features that were orphaned from the original NWI hard copy maps by converting them to narrow polygonal features. Additionally, the data are supplemented with hydrography data, buffered to become polygonal features, as a secondary source for any single-line stream features not mapped by the NWI and to complete segmented connections.

Wetlands for most projects mapped after 2015 were mapped to include all surface water features and are not derived data. The linear hydrography dataset used to derive Version 2 was the U.S. Geological Survey's National Hydrography Dataset (NHD). Specific information on the NHD version used to derive Version 2 and where Version 2 was mapped can be found in the COMMENTS field of the NWI Project Metadata feature class.

Certain wetland habitats are excluded from the National mapping program because of the limitations of aerial imagery as the primary data source used to detect wetlands. These habitats include seagrasses or submerged aquatic vegetation that are found in the intertidal and subtidal zones of estuaries and near shore coastal waters. These habitats, because of their depth, go undetected by aerial imagery. By policy, the Service also excludes certain types of "farmed wetlands" as may be defined by the Food Security Act or that do not coincide with the Cowardin et al. definition. Contact the Service's Regional Wetland Coordinator for additional information on what types of farmed wetlands are included on wetland maps.

Digital wetlands data are intended for use with base maps and digital aerial photography at a scale of 1:12,000 or smaller (zoomed out). Due to the scale, the primary intended use is for regional and watershed data display and analysis, rather than specific project data analysis. The map products were neither designed nor intended to represent legal or regulatory products. Questions or comments regarding the interpretation or classification of wetlands or deepwater habitats can be addressed by visiting http://www.fws.gov/wetlands/FAQs.html. Due to the quantity and complexity of the wetlands data the wetlands only display at 1:250,000 scale and greater (zoomed in).

These data were developed in conjunction with the publication Cowardin, L.M., V. Carter, F.C. Golet, and E.T. LaRoe. 1979. Classification of Wetlands and Deepwater Habitats of the United States. U.S. Department of the Interior, Fish and Wildlife Service, Washington, DC. FWS/OBS-79/31. Alpha-numeric map codes have been developed to correspond to the wetland and deepwater classifications described. For more information on the wetland classification codes visit http://www.fws.gov/wetlands/Data/Wetland-Codes.html. The U.S. Fish and Wildlife Service uses data standards to increase the quality and compatibility of its data. The standards used for the wetlands data can be found at: http://www.fws.gov/wetlands/Data/Data-Standards.html and include the FGDC Wetlands Mapping Standard, FGDC-STD-015-2009.

Note that coastline delineations were drawn to follow the extent of wetland or deepwater features as described by this project and may not match the coastline shown in other base maps.

MassGIS provides these data for use with other data in Mass. State Plane projection and does not maintain or update the database. Data not currently in digital format will be added to database when made available by NWI.

The November 2020 update replaced all previous versions of these layers. The polyline layer NWI_ARC was discontinued at this time as it was no longer maintained by USFWS.