These layers are a modeled representation of wind velocities in the Commonwealth of Massachusetts. 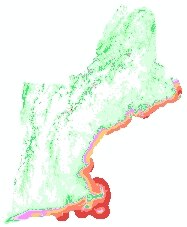 In continuing a policy of promoting renewable and clean energy sources, the Executive Office of Energy and Environmental Affairs (EOEEA) has put considerable effort into researching development sites for wind-based energy production.  A key datalayer in this initiative is a modeled representation of wind velocities in the Commonwealth of Massachusetts.  The original wind resource data were developed by Truewind Solutions, LLC under contract to AWS Scientific, Inc. as part of a project jointly funded by the Connecticut Clean Energy Fund, the Massachusetts Technology Collaborative (MTC), and Northeast Utilities System.  This data has undergone further processing to make it more suitable for analyses that utilize other geographic datalayers maintained by MassGIS.  Both the original wind data and the MassGIS-processed versions are being made available here.

In ArcSDE are four raster layers covering all of New England and depicting mean sustained wind speeds calculated at heights of 30, 50, 70  and 100 meters above the surface named, respectively:

In addition, a polygon layer, WINDSPEEDGRID_POLY, stores all 4 wind speeds in a vectorized version of the rasters, for Massachusetts only.

In 2002/2003, Truewind Solutions, LLC produced maps and data displaying mean sustained wind speeds across New England. These wind speeds were calculated at heights of 30m, 50m, 70m, and 100m and stored in raster grids with a 200m x 200m resolution. A MesoMap system was used for the modeling exercise. More technical details about the methodology and data from this project can be found in the final report Wind Resource Maps of Northern New England. These grids were made available to MassGIS in an effort to identify the Commonwealth’s developable wind resources by comparing “high wind” areas with other geographic data considered to be enhancing or constraining to such development. Processing was necessary to facilitate the compatibility of these data with already established geographic datasets.

The three primary limitations to compatibility with other MassGIS data were:
1)    The projection and orientation of the data.
2)    The format of the data. (raster vs. vector)
3)    The resolution of the data.

The original grids were subjected to the ArcInfo GRIDPOINT function, generating point coverages of cell centroids retaining the wind speed data.  The points were then clipped to a boundary representing an aggregate of the land area of Massachusetts, the offshore state waters (3 mile buffer), and ocean sanctuary areas that also constitute state waters. This data was then projected into the Mass. Stateplane NAD83 projection (meters).

For EOEEA project-specific purposes, the point attribute data was transferred onto a statewide vector grid (vectorized fishnet representation of a raster) with a resolution of 250 meters, and a geographic extent encompassing the previously described clip boundary, rounded to the nearest 1,000 meters. This was done to allow storage of multiple attributes in a single dataset (a limitation of raster-based data is that it only allows the storage of a single grid value), and to facilitate vector-based analyses with data that have also been processed and transferred to the same index grid. The original points were separated by a distance of 200 meters and oriented slightly askew to the vector grid generated in the Massachusetts Stateplane Mainland Meters projection, occasionally resulting in more than one point existing in a single 250m x 250m vector cell. For those cells that had more than one point within their areas, the average of their wind speeds at that altitude and location were calculated and stored in the attributes.

The original grids (available for download from the link at the top of this page) contain the modeled sustained mean wind speeds (meters/second) in the default VALUE attribute like all rasters, and the grid names contain the height (30m, 50m, 70m, 100m) of which they are representative. MassGIS distributes the grids as they provided by MTC.

MassGIS is not maintaining or updating this datalayer. Any questions about the generation of the original wind speed data should be directed to Orlando Martinez (OMartinez@MassCEC.com), Project Manager at the Massachusetts Clean Energy Center. Any technical GIS or post-processing questions should be directed to Dan Marrier, GIS Analyst at MassGIS (daniel.marrier@mass.gov).