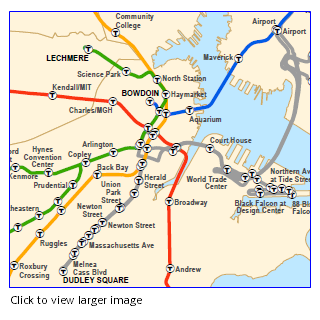 The MBTA Rapid Transit Station layer represents the station stops on the five subway, streetcar/trolley and Silver Line bus lines in the Massachusetts Bay Transportation Authority's rapid transit rail network. Stations are contained in a point feature class named MBTA_NODE. The five 'T' lines - Blue, Green, Orange, Red and Silver - are represented with linework in the layer MBTA_ARC. In most cases stops are represented by a single point rather than a point for each entrance or inbound/outbound platform. All lines except those for the Silver Line are represented with a single line for both directions.

The layers were developed by the Central Transportation Planning Staff (CTPS), with additional editing by MassGIS based on current information from mbta.com and aerial and street-based imagery.

It should be noted that the Silver Line actually consists of buses, not trains, but the line is included in this layer because the MBTA includes it as one of the color-coded lines on its subway system map.

The MBTA Commuter Rail lines are included in the Trains layer.

Original linework was acquired from 1:100,000 USGS Digital Line Graph transportation data, and updates and additions were made by CTPS staff. MassGIS performed further quality checking and updating of the station names and some adjustment of the features to ortho imagery. The Silver Line was added to the layer with the April 2004 update. As of the January 2006 update, all linework and points were provided by CTPS, replacing and arcs from the DLGs.

Older Arc/Info coverage versions had the points as a NODE feature class, but editing for recent versions was done using shapefiles, and the link between arcs and true nodes was lost. The name of the layer MBTA_NODE still uses "NODE" so that the MassGIS Data Viewer and OLIVER applications will continue to function properly.

The MBTA_ARC attribute table has the following fields:

The MBTA_NODE attribute table for transit station points has the following fields:

This datalayer will be updated as needed by the MassGIS. On July 2, 2013 the name of the Green Line stop "Hynes Convention Ctr/ICA" was edited to be "Hynes Convention Center". On September 4, 2014 the Assembly station on the Orange Line was added. The SL3 branch of the Silver Line to Chelsea was added in June 2018. In January 2020 MassGIS adjusted some linework for the Silver Line 2 and 3 branches and modified the Grade field based on 2018 Google Imagery. MassGIS also edited the placement and names of some stops on the Silver Line Branches 2 and 4/5 based on 2018 Google Imagery, Google Street View and mbta.com.