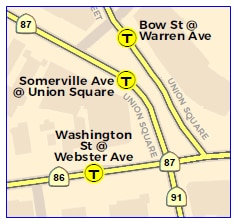 The bus routes layer, named MBTABUSROUTES_ARC, includes the many local variations during the course of a day along each primary route, such as a short turn or a spur into a shopping center. Each "variant" (including inbound and outbound routes) is represented by its own feature, resulting in coincident or "stacked" arcs.

The bus stops layer is named MBTABUSSTOPS_PT. Each point has a unique identifier (STOP_ID), with a different point for stops on both sides of the road (for inbound and outbound bus routes).

The primary input sources were the General Transit Feed Specification (GTFS) shapes, stops and stop-times files produced by the MBTA for each quarterly schedule.

Point feature classes were generated from the shape and stop coordinate files, and their features snapped to 2011 Massachusetts Department of Transportation (DOT) Roads roadway inventory features. Shape points for each route underwent further edits to match the path traversed by the route. A polyline feature for each route was then generated from the shape points using the ArcGIS Points to Line tool. Each polyline feature was converted to a route using the CreateRoute linear referencing tool. Stop points underwent further edits to improve locational accuracy.

Two related tables are stored and distributed with the route and stop data: To associate a bus stop with the route(s) it serves, MassGIS created two ArcSDE relationship classes. Each bus stop in the point layer has a unique STOP_ID, which may be related (1:Many) to STOP_ID in the MBTABUSSTOPS_PT_EVENTS table. The unique CTPS_ROUTE_ID field in MBTAROUTES_ARCS may be related (1:Many) to CTPS_ROUTE_ID in MBTABUSSTOPS_PT_EVENTS. The relationship classes MBTABUSSTOPS_PT_TO_STOP_EVENTS and MBTABUSROUTES_ARC_TO_STOP_EVENTS, respectively, establish these relates. These relationship classes are included in the file geodatabase version of the data that may be downloaded from the link at the top of this page.

While originally developed by The Central Transportation Planning Staff, that office is no longer maintaining these datasets.

For the most up-to-date information please visit the MBTA's Bus Schedules & Maps page.

ROUTE_DESC
Route description (e.g. "Route 1 Inbound")
TRIP_HEADSIGN
Description of the destination of the route. Generally matches the digital display on the front of the bus.
CTPS_ROUTE_ID
Unique long integer representation of the route and direction. Equal to 1000 * CTPS_ROUTE + DIRECTION.