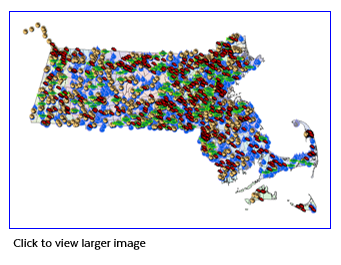 The Federal Clean Water Act (CWA) directs states to monitor and report on the condition of their water resources. The Water Quality Monitoring Stations data layer was compiled by MassDEP staff in fulfillment of CWA mandates.

Four types of monitoring stations are detailed below. Each station, stored as a single point in the layer, represents a location that was sampled on one or more occasions during one or more years by DWM-WPP staff or their agents:

Fish Toxics Stations: 1983-2015 (n=405); locations where whole fish were collected for subsequent tissue analysis of one or more contaminants.

Fish Population Stations: 2005-2011 (n=177); locations where fish were collected, identified, measured, and released and where habitat quality conditions have been recorded.

Benthic Macroinvertebrate Stations: 1983-2017 (n=923); locations where samples of benthic macroinvertebrates have been collected for subsequent subsampling and taxonomic identification and where habitat quality conditions have been recorded. Benthic lake sampling stations not yet included. (“Macroinvertebrate” is defined to include all aquatic members of the Annelida; all aquatic Mollusca; aquatic macro Crustacea; aquatic Arachnida; and the aquatic life stages of Insecta—the exception being the Collembola, Hemiptera, and adult Coleoptera other than Elmidae).

Stations can overlap if particular locations were monitored for more than one survey type.

In ArcSDE the layer is named DWMWPP_WATER_QUALITY_STATIONS.

When geo-referencing began in the 1990s, using Geographic Information Systems, station points were placed on water features as represented on the 1:25,000 U.S. Geological Survey (USGS) topographic quadrangle images maintained by MassGIS. If a water feature was not depicted on the quadrangle, then ortho photo images were used to place the point and documentation was added to the descriptor (e.g.,”…stream not apparent on quadrangle…”). Points depicting stream monitoring stations are representative of an approximate 100 foot reach, assuming no obvious changes to water quality from other water sources (e.g., tributaries, National Pollutant Discharge Elimination System (NPDES) permitted outfalls). Points depicting lake monitoring stations are representative of actual locations sampled (e.g., deep-hole, shoreline) or are placed at a central point as a general locator for monitoring types that encompass the whole water body (e.g., fish toxics). Points depicting discharges are placed at the mouth of the outfall prior to mixing with the receiving water.

After initial station placement, field staff reviewed mapped points to ensure placement agreed with field notes. The systematic random-point-selection process is used when a probabilistic design monitoring project occurs. Sampling points are generated either from the 1:100,000 National Hydrography Dataset Plus coverage (NHD-Plus-coverage), or from the higher resolution 1:24,000 NHD-Plus-coverage, following the EPA’s protocols. Randomly-selected points were not adjusted to fall on quadrangle-imaged waters, therefore some of those stations may appear to be “on dry land” when stations are overlaid on the quadrangle images.

The water quality monitoring stations should be displayed with the MassDEP DWM WPP watersheds data (included in the download at the top of this page). Fields in the IL_DWMWPP_WATERSHEDS_POLY attribute table are as follows. (Note: these delineations are based on MassGIS 'Major Basins' layer but modified by the DWM-WPP to reflect surface water drainage areas used with the MassDEP Integrated List of Waters report.):

The MassDEP DWM-WPP is maintaining this datalayer. Periodic updates are anticipated as monitoring years are completed and station mapping is verified by sampling staff. For further information about this coverage and other data associated with these stations, contact Richard Chase (Richard.F.Chase@mass.gov, 508-767-2859) in the MassDEP DWM-WPP.