The Solid Waste Diversion and Disposal Datalayer was compiled by the Department of Environmental Protection (MassDEP) to track the locations of land disposal of solid waste. The Solid Waste Diversion and Disposal Datalayer was compiled by the Department of Environmental Protection (MassDEP) to track the locations of land disposal of solid waste. This statewide datalayer contains the majority of locations currently regulated under MassDEP's solid waste regulations (310 CMR 16.000 & 19.000).

Polygons in the datalayer include both landfills and dumping grounds. Data are stored in ArcSDE as two layers: SW_LD_POLY (polygons) and SW_LD_PT (point feature class, with one point for each polygon).

Transfer/handling, combustion and composting activities were represented as associated features of land disposal polygons until 2011, when they were first offered as separate point layers.

Since then, regulatory changes initiated in 2012 have built capacity for organic waste diversion. Beginning in 2016 locations for these operations, exempt from site assignment and permits pursuant to 310 CMR 19.000, became available. To better understand diversion-related regulatory changes, helpful definitions can be found in Section 16.02 of the Solid Waste Site Assignment Regulations. The Anaerobic Digestion & Organics Diversion page on mass.gov/dep may also be of interest. 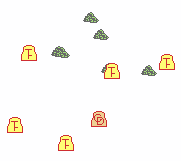 1994 and earlier: DEP regional office files were searched for locus maps and site plans which designated the location of solid waste facilities. In some cases the facility footprint  was located on the map; in other instances a generalized location (point or polygon) was noted. These were hand-drawn onto a master set of USGS topographic quadrangle maps from which the datalayer was digitized. In the absence of a landfill footprint, point locations were buffered to reflect permitted or reported acreage (when insufficient data was available, 29.9 acres was used). When possible, these buffered point locations were updated with polygons from MassGIS 1985 Land Use data.

1997-2008: Locus maps and site plans from regional and Boston office files were automated directly into Arc/Info while using scanned USGS quads &/or digital orthophotos as background images. Point locations were buffered as described above; several of these point locations were collected using global positioning system technology (GPS). Several polygons were copied from the Protected and Recreational Open Space and Land Use (2005) Datalayers.

2009 and beyond: GPS, parcel data, Pictometry (oblique view or "bird's eye" imagery), current/historical topographic maps and ortho imagery are being used to locate unmapped features and refine existing ones.

POLYGONS and POINTS - Feature attributes associated with both polygons and points include:

MassDEP maintains operational status, location, operation type, capacity, and contacts in its Facility Master File (FMF) database. An extract of Solid Waste data from FMF is available on MassDEP's website: https://www.mass.gov/lists/massachusetts-landfills-transfer-stations-compost-sites-recycling-facilities, under the heading “Massachusetts Solid Waste Facilities Master List”. Facility information is linked to the GIS datalayer via the RO_ACCT. Selected land disposal polygon attributes shown below are included where appropriate, for ease of use.

POINTS - The data structure for point features mimics that of the BWP Major Facilities Datalayer.

In addition to feature attributes associated with both points and polygons, point attributes include the identifiers FAC_ID and ROOT_ID which can be used to associate features with other point layers, including the BWP Major Facilities and Underground Storage Tanks datalayers. Handling Facility and site assignment exempt operations additionally include a “classification type code” summarizing permit categories and types of solid waste activities permitted at these locations.

Land Disposal Operations Using the polygon layer SW_LD_POLY and SW_LD_POLY_DAT table, 15 spatial views (selected sets of features) were created in ArcSDE. These views are distributed as separate shapefiles along with the full layers and tables in the download at the top of this page. The views are named as follows: Solid Waste Operations other than Land Disposal

Using an in-house development point layer and MassDEP Facility Master File Regulated Objects table, seven spatial views (selected sets of features) were created in ArcSDE. These views are distributed as separate shapefiles in the download at the top of this page. The views are as follows:

Please note: although the MassDEP Bureau of Waste Prevention (BWP) has been reorganized as the Bureau of Air and Waste (BAW), the BWP prefix has been maintained in the naming convention of layers in our geodatabase.

The MassDEP-Bureau of Air and Waste is maintaining this datalayer.

In 2011 the datalayer was redesigned and feature level attribution increased. Land Disposal sites continued to be represented as polygons.  Solid Waste Operations other than Land Disposal were represented as points rather than associated features of a land disposal polygon. [Every transfer station and combustion facility is not necessarily within or adjacent to a landfill. Rather than creating polygons for features mapped as points in other layers, these “other than land disposal” activities were mapped as standalone features.] This structure persists in the 2013 and 2016 updates.