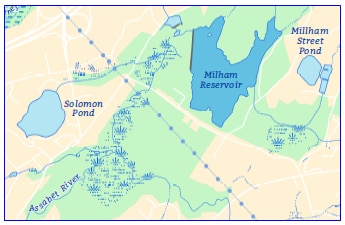 The layer is a hybrid of data based on USGS Digital Line Graphs (DLGs), scanned mylar separates obtained from the USGS, digitized hydrographic features from paper USGS 1:25,000 Topographic Quadrangle maps and data extracted from the MassDEP Wetlands datalayer. Areas within many surface water supply watersheds have been enhanced by using higher resolution streams and lakes from the MassDEP Wetlands datalayer, many areas have also been field verified. This layer is intended as an interim product that will be incorporated into the USGS’s National Hydrography Dataset (NHD) when funding and resources become available. If you are interested in providing data, funding, field work, or becoming part of an NHD working group, please contact Tara Manno Richer of the MassDEP GIS Program by email at tara.manno@mass.gov.

Available statewide, the hydrography (arc and polygon feature classes) is stored in ArcSDE as HYDRO25K_POLY and HYDRO25K_ARC.

The DLG quadrangles were converted into Arc/INFO coverages and projected into the Massachusetts State Plane Coordinate System. The long list of items (MAJOR1, MINOR1, MAJOR2, MINOR2...) was then concatenated to a more simplified coding system. For each feature MINORn was truncated to three characters and linked to the other minor codes to create MINOR_TOT. For example, a submerged (612) wetland (111) is now coded MINOR_TOT = 612111. The original MAJORn, MINORn pairs are no longer part of the attribute tables.

Quadrangles covering Nantucket and Martha’s Vineyard were completely digitized from the 1:25,000 USGS quadrangles. Though not as thoroughly coded as the 1:25,000 DLGs, the linework is all at 1:25,000

The scanned quadrangles were automated in-house by scanning USGS mylar separates at 500 dots per inch. The resulting images were vectorized in GRID and then edited in ARCEDIT. Features missing from the blue line separate (i.e. dams or man-made shore) were digitized from the paper quadrangles.

An ongoing project by the MassDEP GIS Program to redelineate surface water supply watersheds using digital terrain models is adding additional streams within the newly delineated watersheds. These streams are from the MassDEP Wetlands datalayer with some additional on screen digitizing from the 2005 Color OrthoPhotos. Streams added from this process are generally coded as intermittent unless field verification proves otherwise. In 2007 the outlines of all reservoirs were replaced with those from the MassDEP Wetlands datalayer so either dataset can be used with the SWP Zones datalayer. In 2008 field verified streams for the Wachusett Reservoir watershed were provided by DCR West Boylston GIS staff and added.

For the December 2003 update, the layer was extracted from the Quad library and dissolved into a single coverage, which was dissolved on all items after the SOURCE field was dropped. Most slivers, gaps, and other artifacts left over from the quad tiling scheme were removed. Some codes were also refined. Edits were preformed by MassGIS and Department of Environmental Protection (DEP) GIS Group staff.

The high resolution streams from the DEP Wetlands datalayer were field verified and edited mostly in the upper reaches of the watersheds where they crossed roads or if the natural flow wasn’t apparent.

The layer contains both a polygon and arc feature class. The modified DLG coding scheme is extensive and includes a wide variety of features, including ponds, cranberry bogs, impoundments, wetlands, tidal flats, dams, streams, and aqueducts. Only data from the DLGs have been coded this completely. Data from other sources have been coded to include ponds and streams and in the case of data from the scanned quads, wetlands.

Pond and Lake Inventory System (PALIS) IDs are unique codes which were added to ponds and lakes by  DEP GIS in conjunction with the DEP Division of Watershed Management using identification codes developed by the Pond and Lakes Inventory System. For historical reasons, some wetland polygons have PALIS IDs. PALIS IDs were also given to impoundment areas along rivers and when necessary closure lines were added.

Since the data now comes from different sources, the attribute SOURCE was added to differentiate which program/entity provided the feature. An attribute for the approximate NHD resolution was added to aid in future input into NHD.

The fields in the polygon attribute table are:

Source is for features coded as "USGS/MGIS" in the SOURCE field. Some of these features may have been modified by on-screen digitizing and/or enhanced with data from the MassDEP Wetlands (1:12,000) layer. See the SOURCE fields in the polygon and arc layers for specific sources. Also see the status map for the pre-MassDEP-enhanced hydrography data.

Note that these hydrography layers do not have feature names (e.g., "Quabbin Reservoir" or "Connecticut River") as attributes. To label the features in these layers, use the annotation in the HYDRO subclass of the Geographic Place Names layer.

The 2007 update includes new streams within the watersheds of active sources in Lynn, Peabody, Danvers, Middleton, Beverly, Manchester, and Ipswich.

The 2009 update (released in March 2010) includes new streams within the watersheds of active and inactive sources in Ashburnham, Winchendon, Gardner, Fitchburg (North), Hudson, Marlborough, Westboro, Milford, Braintree, Hingham, Weymouth, Abington, Rockland, Brockton, Attleboro, Somerset, Fall River, Falmouth, Plymouth, Wareham, New Bedford, Taunton, and Cambridge. The code for closure lines was split into 2 different codes, where arc_code = 2 was assigned to features between tidal flats and bay/ocean, and arc_code = 12 was assigned to closure lines between different types of wetlands features. A minor_tot of 7204 was given to the tidal flat features. Some changes were made to the Quabbin Reservoir and tributaries, along with some covered reservoirs in Weston, Milton and Medford, at the request of the MWRA GIS Program. A general cleanup was also performed to address logical errors in the original dataset, like a stream inside an open water feature or a pond surrounded by a wetland line feature.

The March 2017 update added the NAME fields to both feature classes. MassGIS added these fields based on PALIS and SARIS codes. If features did not have these codes, annotation and USGS topographic quad imagery were used as sources. The LEN, SARISNAME and SARISCODE fields were also added at this time.

The April 2017 update includes MassDEP revisions to Surface Water Supply Protection (SWP) Watersheds in the MassDEP Western Region (except for the Cobble Mountain Complex and the Quabbin Reservoir) as well as the watersheds for Mill Pond (Burlington Water  Dept.), Old Oaken Bucket Pond (Scituate Water Division) and Silver Lake (Brockton Water Commission). Other MassDEP updates include linework for eleven missing stream segments, as provided by the Division of Fish and Game. These segments and related edits nearby may be found in the Chicopee, Merrimack, Millers, Nashua, SuAsCo and South Coastal basins.