This layer contains features mapped in the third phase of the MassDEP Eelgrass Mapping Project. Phase 3 was conducted in 2006 and 2007 using digital imagery and focused on re-mapping 33 of the original 46 embayment. 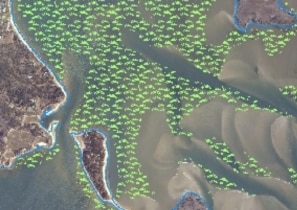 This layer contains features mapped in the third phase of the MassDEP Eelgrass Mapping Project. Phase 3 was conducted in 2006 and 2007 using digital imagery and focused on re-mapping 33 of the original 46 embayments which were mapped in Phase 1 (1995) and Phase 2 (2001). Please refer to the DEP Eelgrass documentation for a detailed description of Phase 1 and 2 of the MassDEP Eelgrass Mapping Project. The 33 selected embayments included representative embayments along the Massachusetts coastline; 7 along the north shore, 7 along the south shore of Cape Cod, 13 in Buzzards Bay and 6 on the Islands.

Digital imagery was acquired in 2006 and 2007 through a contract with GeoVantage Corporation (Peabody, MA). The GeoVantage sensor consists of a digital camera with four bands centered on blue (450nm), green (550nm), red (650nm) and near-infrared (850nm). The output of the camera system are GeoTiff image products which were created from the true color imagery captured with a 0.5 meter ground sample distance resolution and 8 bit radiometric resolution. The images were ortho-rectified, terrain corrected (using 7.5m USGS DEM's), georegistered and mosaics were created for each flight mission with a spatial accuracy of +/- 3 meters (90% of pixels). The digital images were interpreted monoscopically on screen using the same photo-interpretative protocols as the other earlier DEP mapping projects (1995 and 2001). The digital imagery was analyzed and interpreted using a high resolution CRT 22 inch monitor.

Polygons of seagrass were hand digitized on-screen using the ArcGIS 9 suite of software. Much of the Massachusetts coast has a sandy substrate providing a useful color contrast to map the darker seagrass photo-signatures. Nonetheless, there are still uncertainties with signature interpretation that required field verification. Extensive fieldwork was conducted to develop a quantitative understanding of the signatures and gather surface level data where the presence or extent of habitat was not apparent. The fieldwork methods and ground-truthing protocols were similar for this project as were utilized in the earlier two mapping efforts (1995 and 2001). Questionable points in the interpreted data were investigated in a small boat using underwater videography, high resolution acoustics and GPS (1 meter accuracy). These field points were logged into the on-board digital mapping database and used back in the laboratory for the final interpretation. Seagrass polygon vector coverages were assessed for accuracy in September and October, 2007 (260 points). The assessments were based on random points generated within the polygon boundaries generated by the Hawth’s Tools extension within the ArcMap GIS environment. Navigation to each point in the field was accomplished using DGPS ( 1 meter accuracy. The underwater video camera was used to verify the presence of the mapped feature at the random point. The accuracy of the mapped seagrass were 94.2 % (245 out of 260 sites mapped correctly for the presence/absence of seagrass).

In addition to the habitat and year fields attributes were added for study area and embayment. The study area is divided into large geographic areas for reporting purposes and the embayments are smaller areas for statistical results. The names of embayments in this layer are in no way official designations of embayment names or areas and are to be used with this data only.

This layer is maintained by the MassDEP Wetlands Conservancy Program. Additional information on the MassDEP Eelgrass Mapping Project.