A Geographic Response Plan (GRP) is a planning document and response tool that is intended to guide local responders during the first 24 to 48 hours of a major coastal oil spill until additional resources supplied by Unified Command can arrive.

A Geographic Response Plan (GRP) is a planning document and response tool that is intended to guide local responders during the first 24 to 48 hours of a major coastal oil spill until additional resources supplied by Unified Command can arrive. As a response tool the GRP allows quick decisions to be made by providing detailed geographic information on shoreline types, sensitive natural and cultural resources. 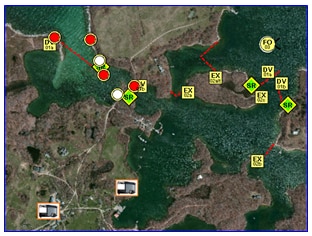 This information, together with estimates of response equipment requirements, staging locations and pre-identified deployment strategies for protecting sensitive environmental areas, provides a basis for local responders to develop a more effective and coordinated initial response. Geographic Response Plans also provide important information to the oil spill incident management team in planning and implementing the environmental response to an oil spill. A Geographic Response Plan is usually part of the Area Contingency Plan (ACP) that each USCG Sector is required to maintain to enhance preparedness and prevention activities for all coastal areas of the United States.

In support of the Massachusetts Geographic Response Plans, MassDEP has provided oil spill response equipment and trailers to 68 coastal municipalities and two MassDEP regional offices. The equipment to be used by local spill responders will provide the rapid response capability necessary to contain a spill at its source and to protect or prevent oiling of sensitive habitats and important resources. The equipment serves as an important response asset in the event of a localized spill as well as for a spill of regional scope.

Each coastal municipality in possession of a MassDEP oil spill response trailer has signed the Commonwealth Standard Contract forms that establish terms and conditions regarding the custody and use of the oil spill response equipment. These agreements allow municipalities to use the equipment for certain defined purposes while the Commonwealth of Massachusetts retains ownership of the equipment as well as the responsibility to maintain and restock the trailer and equipment and may relocate oil spill trailers from one community to another as needed to address the resource management needs of an oil spill event.

MassDEP maintains a web site to provide training and inventory information pertaining to this oil spill equipment including locations and local points of contact at https://www.mass.gov/how-to/find-oil-spill-trailer-locations.

The Massachusetts Department of Environmental Protection (MassDEP) contracted with Nuka Research and Planning Group to prepare GRP's for all coastal areas. Preparation and funding of these response plans has been a major focus of MassDEP's efforts to enhance coastal oil spill response and preparedness in Massachusetts. Geographic Response Plans for Massachusetts coastal areas can be found at http://grp.nukaresearch.com/. One of the deliverables was GIS data representing where booms should be employed, what tactics to use where and the locations of other relevant points. GIS data was developed by on screen digitizing with an orthophoto base map. These were delivered as three individual layers.

An additional point layer of oil spill response trailer locations was generated by MassDEP based on information provided by the MassDEP Oil Spill Prevention and Response Program. The MassDEP Oil Spill Response Trailer layer (DEP_OSR_TRAILER_PT) contains the approximate locations of oil spill response equipment provided by MassDEP to coastal communities in Massachusetts to enhance early response to an oil spill.

GRPs are developed for specific sites like the mouth of a river, or a specific inlet. There are 159 sites around Massachusetts with corresponding response plans. These sites are grouped into areas. A Geographic Response Plan will typically contain booms, tactics and probably other points. All three GRP layers share a number of fields regarding the location of the site and references to the GRP of which a feature is a part.

The layer files provided by MassDEP and distributed with the data by MassGIS were designed to closely mimic the symbology used in the GRP documents.

Unique to the tactics layer are the TACTIC_TYP and TACTIC_NUM fields. The tactic number (TACTIC_NUM) is a reference to the explanation of that tactic in the actual GRP for that site. The Tactic Type (TACTIC_TYP) field contains a code for the type of tactic as follows:

This data is currently maintained by the MassDEP GIS Program in cooperation with the MassDEP Oil Spill Prevention and Response Program. The latest update of the three GRP data layers was published on May 11, 2017. On September 29 the three GRP layers were updated with revised URLs in the GRP_LINK field.