November 2018
This layer is the official state-maintained street transportation dataset available from MassGIS. It represents all the public and many of the private roadways in Massachusetts and includes designations for Interstate, U.S. and State routes. 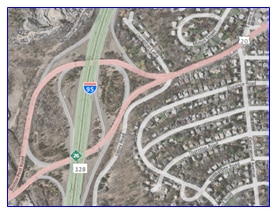 The data layer published in November 2018 is based on the MassDOT 2017 year-end Road Inventory layer and results of a 2014-15 MassDOT-Central Transportation Planning Staff project to conflate street names and other attributes from MassGIS' "base streets" to the MassDOT Road Inventory linework. The base streets are continually maintained by MassGIS as part of the NextGen 911 and Master Address Database projects. MassGIS staff reviewed the conflated layer and added many base street arcs digitized after the completion of the conflation work. Other edits included modifying some linework in areas of recent construction and roadway reconfiguration to align to 2017-18 Google ortho imagery, and making minor fixes to attributes and linework.

The following feature classes are available:

Note: The "EOT" in the layer names was not changed to "DOT" because legacy applications and web services rely on the existing names. 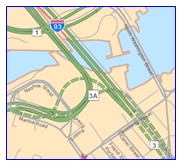 MassGIS received the 2017 year-end release of MassDOT's Road Inventory data and, in addition to the edits described above, further processed the data to facilitate display, particularly in OLIVER (which includes the statewide Base Map) and ArcMap. Processing included:

To produce the Major Roads layer (EOTMAJROADS_ARC), MassGIS selected arcs where CLASS = 1, 2, 3 and 4 from the full layer, dropped all fields included in the original layer from MassDOT, and dissolved on all the fields added by MassGIS to reduce the number of arc segments.

The Major Routes layer (EOTMAJROADS_RTE_MAJOR) was produced by MassGIS from the Major Roads layer by selecting all features where ADMIN_TYPE = 1 (Interstate) or 2 (U.S.), or where the RT_NUMBER or any of the alternate route numbers for state routes (ADMIN_TYPE = 3) is 2, 3, 8, 9, 18, 24, 25, 28 or 128. In ArcGIS 10.x, these roads were dissolved as multi-part features on the ADMIN_TYPE and RT_NUMBER fields. This layer was produced for fast display at small (e.g. statewide) scales rather than for true route-based analysis.

Each arc in the "All Roads" EOTROADS_ARC feature class contains the following fields added by MassGIS:

The Major Roads layer EOTMAJROADS_ARC contains only the above fields added by MassGIS except MGIS_TOWN, LENGTH_MI and LENGTH_FT. The CLASS field contains values 1, 2, 3 and 4.

The other fields in the arc attribute table were included in the data from MassDOT. These include roadway classification, ownership, physical conditions, traffic volumes, pavement conditions, highway performance monitoring information, and more. For details see the Road Inventory Data Dictionary (PDF format, 105 kb). Note that in the shapefile download, that format only allows for ten characters in field names; the longer Road Inventory File field names are truncated when converted from an ArcSDE layer to a shapefile.

MassDOT GIS staff regularly update this layer. MassGIS receives a version from MassDOT and after completing the processing described above makes updated data available once a year.

>> Report errors or changes to MassDOT

Since the MassDOT roads do not contain address ranges, they may not be used for address matching (geocoding) in GIS software. The most recent roads data publicly available from MassGIS that may be used for geocoding applications are the TIGER roads from the 2010 U.S. Census. For more accurate and complete address matching use the Statewide Address Points for Geocoding.