June 2000
The Major Watersheds layer was originally based on the Major Basins layer and then modified to fit the needs of the MassGIS Watershed Analyst project. MassGIS has produced a statewide digital datalayer of the 32 major watersheds covering  Massachusetts as defined by the USGS Water Resources Division and the MA Water Resources Commission. Unlike the Major Basins layer, the watersheds in this layer extend beyond the state boundary to include the full extent of either the full watershed or a full USGS sub-basin. In ArcSDE are two layers, named WATERSHEDS_POLY and WATERSHEDS_ARC. 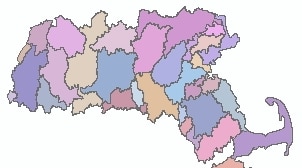 The Major Watersheds layer was originally based on the Major Basins layer and then modified to fit the needs of the MassGIS Watershed Analyst project. The state boundary was removed from MAJ_BAS and the existing internal watershed boundaries were modified or adjusted to conform to the 1:25,000 Hydrography layer. To produce the watershed boundaries that extend beyond the state boundary, sub-basin data from the adjacent state GIS databases were incorporated. Some of these were adjusted to conform to the Networked Hydro Centerlines data, which was developed for use in the Watershed Analyst. These data are used for modeling stream flow. In some cases, the out-of-state sub-basins were clipped to include data that affect stream flow into or out of Massachusetts. In addition, the coastline was buffered for generalization. Non-contiguous basins, such as the two parts of the North Coastal watershed, were combined and connected with the coastal buffer to conform to the naming scheme as defined in the Stream and River Information System (SARIS).

MassGIS is maintaining this datalayer.