The Massachusetts Division of Fisheries and Wildlife (MADFW) has mapped Coldwater Fisheries Resources (CFRs) at a scale of 1:25,000, based on the National Hydrography Dataset (NHD) data. 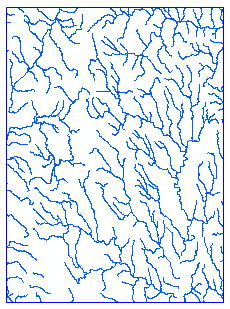 CFRs are important habitat for a number of cold water species, including trout. Coldwater species are typically more sensitive than other species to alterations to stream flow, water quality and temperature within their aquatic habitat. Identification of CFRs is based on fish samples collected annually by staff biologists and technicians. New streams are sampled and evaluated yearly.

The MADFW stores stream sampling data based on SARIS ID. Since SARIS IDs were originally assigned at a scale of 1:100,000 those SARIS codes were first reassigned to the NHD arcs, mapped at a scale of 1:25,000. All of the NHD arcs, including artificial flowpaths, attributed with a given SARIS code were denoted as Coldwater if there was a sampling point for that stream that was designated a CFR.

Wherever possible, the reach designated by the SARIS code on the sampled stream was highlighted in its entirety in NHD. The SARIS code as assigned in the original 1:100,000 hydrography data was attributed to the NHD linework where it followed the flowpath. Rivers and streams are clipped at 0.5 km outside the Massachusetts border to account for any sinuosity at the state border.

The DFWCFR_ARC attribute table has the following fields:

Maintained by MassGIS and the DFW GIS program.

There is an ongoing effort to map CFR resource information; new streams are sampled and evaluated yearly. The datalayer will be updated on an as-needed basis.

In March 2015 DFW simplified the data model by dissolving on SARIS code to create simple linear features. The columns NHD_FTYPE and FTYPE_DESC were deleted as part of this update. Each update to the datalayer reflects the prior year's sampling efforts, with the 2021 datalayer reflecting those streams sampled during 2020.