A seamless digital dataset of land cover / land use, created using semi-automated methods, and based on April 2005 digital ortho imagery. 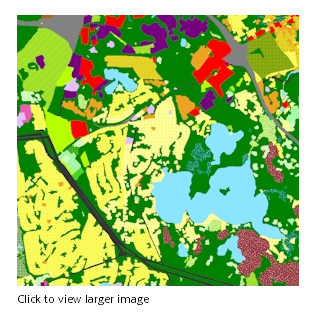 The Land Use (2005) datalayer is a Massachusetts statewide, seamless digital dataset of land cover / land use, created using semi-automated methods, and based on 0.5 meter resolution digital ortho imagery captured in April 2005.

The classification scheme is based on the coding schema used for previous Massachusetts land use datasets, with modifications. The categorization is represented by two fields: LU05_DESC (land use description) and LUCODE (land use code). Code descriptions are described below.

These data were prepared by Sanborn, and delivered to MassGIS in 10 separate edge-matched delivery area shapefiles.

The minimum mapping unit (MMU) is generally 1 acre, but a MMU as low as ¼ acre may be found in some areas, e.g. in urban areas where assessor parcels were used to enhance the mapping of multi-family residential areas.

The formerly used “MacConnell” schema combined land cover and land use categories, and was designed for manual interpretation of aerial photos.  In this project, that protocol was modified so that it was useful in an automated environment, but it still maintains much compatibility with the older system. The spatial accuracy of the current method is excellent, since the land use map is derived directly from the ortho image.

The project started with a preliminary analysis of a small Test Area, to establish rules and buffer distances. Once these rules were established, they were applied to three larger Pilot Areas covering about 5% of the area of the state, and chosen to include a great deal of development, and a variety of land use types. The Test Area and Pilot Area delineations were then thoroughly reviewed by MassGIS staff, and suggestions were communicated to Sanborn until the product was considered acceptable. The final rules were then applied to a full production process. The data were created and checked in the 2007-2009 time frame. There was a hiatus in production from June to December 2007 due to contractual issues.

In ArcSDE the layer is named LANDUSE2005_POLY.

The process of delineating and coding the data was carried out by Sanborn using semi-automated methods for the classification of the 4-band 2005 ortho imagery, attributes from the manually-compiled 1999 data, and assessor parcels and other ancillary data. Throughout the course of the quality assurance (QA) phase, MassGIS edited extensively, incorporating additional ancillary data, and information from the imagery. Although the statewide data were delivered for 10 separate delivery areas, production was done on even smaller production areas to meet the limitations of various software tools.  All production and delivery areas were edge-matched by Sanborn prior to delivery.

Where no change took place from 1999 to 2005, the labels were derived from the use code in MassGIS' Assessors' Parcels data (where parcel data existed), and from the 1999 land use data wherever no parcel data was available.  Where change had occurred, the land use category was assigned manually.

Wherever parcel data was available, and the parcel use code could be associated in a one-to-one relationship with a single land use code, the use code values were "crosswalked" to the 2005 land use codes. For example, a parcel with an assessor use code of 324 indicates that a supermarket is on the parcel, and so the land use polygon that covers the portion of the parcel with the building and parking lot must be coded 15 – Commercial. On the other hand, when a developed assessor use code can logically be assigned more than one acceptable land use code (a one-to-many relationship), the land use classification required a visual assessment or other approach that can discriminate appropriately. An example might be when the use code is 101, a single-family residence is present, but the land use value could be 11, 12, 13, or 38, depending on the density of residences in the vicinity.

An initial buffering of the impervious data produced the preliminary boundaries of the land uses for urban classes. Before buffering, small (< 20 m2) free-standing impervious clumps were erased.  Most of these were identified as small isolated structures such as sheds, etc.  Depending on the land use label assigned to the clumps, various buffer distances and priority rules were applied.

The non-impervious (pervious) uses were classified separately through image segmentation using Definiens® software.  The segmented classification was filtered to generalize / smooth the class boundaries, and features smaller than about 1 acre were dissolved into surrounding features.

Where logical combinations of segment labels and 1999 land use labels occurred, the segment was labeled with the 1999 class which contained the largest portion of the segment (using a zonal majority rule).  When the combination was illogical, the pervious data were flagged and then corrected in a manual review.

The buffered and labeled impervious and labeled pervious data were combined through a second buffer using ESRI's ArcGIS®.  This buffer incorporated natural classes into urban class delineations, e.g. lawns (pervious segment) into residential (buffered and labeled impervious).  It allowed impervious features of certain classes to grow into pervious areas of specific classes. This buffer was allowed to grow a specified distance beyond the edge of the first buffer.  The buffer distance and class hierarchy were specified in an automated model.

Note: A significant result of the semi-automated method of production is that low and very low density residential areas are mapped so that the “useable area” (the residence and landscaped area immediately around it) is depicted.  For example, a neighborhood of houses on relatively large wooded lots will be shown as polygons around the developed portions of the properties embedded in a matrix of Forest.

Wetlands from the DEP Wetlands datalayer were added to the land use classification, replacing any underlying interpreted polygons. The wetlands polygons were not modified in any way, and the coastline was based on this dataset.  No interpretation of wetlands was done except for cranberry bogs.

A series of filters was applied to smooth the polygon boundaries, and to maintain a minimum mapping area.  (Isolated polygons with developed uses in rural areas were kept, even though the area may have been less than the 1 acre MMU.)

A final manual quality control (QC) review of the data was performed by Sanborn, and polygons that did not delineate appropriately through the automated method were corrected in terms of geometry and labeling.  During this phase of production, MassGIS provided input based on local knowledge and onsite field verification.

Two areas were specifically addressed post production: the under-representation of multi-family housing in areas where there were no parcel data, and the residential class densities.  Multi-family housing was delineated through the use of an assessment dataset geocoded to NAVTEQ road centerlines (Warren Group points), and identified manually in areas where there were significant concentrations of these points.

Upon receipt of the data, MassGIS performed extensive QA steps.  These included comparing the draft land use with numerous ancillary datasets, manual photo interpretation, and field visits.  Draft data was graciously reviewed by several Regional Planning Agencies across the state.

MassGIS carried out an additional post production step to further improve the mapping of residential, commercial, and industrial land use.  In municipalities where assessors' parcels were available, the developed portions of residential, commercial, or industrial parcels with use codes that unambiguously corresponded to single land use codes were incorporated into the land use data. Additionally, in order to make the statewide dataset more manageable, polygons were simplified and slivers were removed.

During QA, MassGIS combined the data into a single statewide layer, and then split it into more manageable County-sized pieces for distribution. For more efficient display and spatial indexing, the final statewide version includes the county boundaries. County boundaries are based on the Towns from Survey Points layer.

MassGIS is maintaining this layer.