February 2007
This layer was created at a 1 meter pixel level using a semi-automated process upon the 2005 Orthophotos to determine what areas are impervious to rainwater. 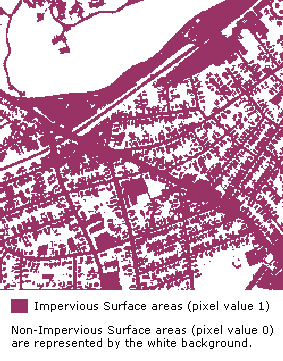 The Impervious Surface raster layer represents impervious surfaces covering the Commonwealth of Massachusetts. The surfaces were extracted using semi-automated techniques by Sanborn Map Company from 50-cm Vexcel UltraCam near infrared orthoimagery that was acquired in April 2005 as part of the Color Ortho Imagery project. The pixel size for the impervious surface data is 1-meter.

Impervious surfaces are defined as:

Non-impervious surfaces can be defined as:

Each category is listed in detail in Table 1 below.

The dataset that MassGIS distributes also contains impervious surface pixels added by MassGIS that were created by buffering the MassDOT Roads layer. This process was done in order to fill in some breaks in roadway areas in the final Sanborn product delivered to MassGIS. This process is described in further detail below.

Stored in the ArcSDE, the statewide layer is named IMG_IMPERVIOUSSURFACE.

A standard semi-automated methodology for extraction of impervious surfaces was developed and adopted. A hybrid classification method was used to extract impervious/pervious features. The primary software tools used were Definiens eCognition and Leica ERDAS Imagine. MassGIS then added a rasterized EOT Roads dataset. The overall process is described and shown below.

The process began with manually examining the images to determine the nature and distribution of classes. The particular approach to segmentation was adopted depending on the relative proportions of urban and vegetation features, as well as on the color-balancing (radiometry) of the images.

Rule-Based Classification of Segments to 18 Classes [See Table 1]
Each segmented ortho tile was classified using a rule-based classification method.  A series of rules (mathematical expressions) was used to assign each “object” a final class designation of impervious or pervious surface.

The Sanborn Impervious Surface data, as delivered, occasionally showed breaks in the continuity of roads due to obscuration of the pavement by overhanging (mainly coniferous) trees [see Figure 1]. Also, some very narrow paved roads were sometimes omitted.

Therefore, MassGIS decided to combine the Sanborn data with data derived from the EOT road centerline (November, 2006). Much of the road linework was derived from 1:5000 Black and White Digital Orthophoto images, with other linework added by EOT atop the 2001/2003 Color Ortho Imagery.

The buffered road centerline was rasterized to a 1-meter GRID. The buffer distances were chosen conservatively, so that the gridded EOT-based road was usually narrower than the corresponding gridded Impervious Surface. [See Figure 2]

Due to orthorectification differences between the two orthophoto datasets, the road centerline did not always overlay the exact center of the Impervious Surface road, and this resulted in occasional bulging or splitting of the gridded depiction of the road surface.

Because the entire statewide dataset totals almost 4.5 GB in size, MassGIS has chosen to tile the data for easier distribution and file handling. The data, in Erdas Imagine (.img) file format, have been broken up into 33 pieces based on the 2005 Color Ortho Mosaic Index. The individual tiles have been highly compressed into .zip files that range in size from 2.7 MB to 25 MB. Once uncompressed, the Imagine files range in size from 80 MB to 130 MB.

There is no vector format for this data.

MassGIS maintains the layer. No updates are planned.