In ArcSDE the layers are named as listed above. Annotation features were also created (see below).

Wetlands were not extracted from the DLGs since more complete data is available from the 1:25,000 land use datalayer. 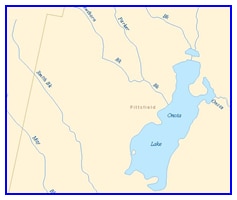 After the features were sorted on attribute, the individual quad coverages were edgematched into five panels based on drainage basins (see index map). Proofplots were produced and compared to the paper 1:25,000 quads. The 1:100,000 hydrography DLGs were found to be significantly generalized in comparison with the 1:25,000 paper quads. Many small ponds and streams were not automated by USGS. Approximately 30% of the minor streams and 20% of the minor ponds are missing from the 1:100,000 DLGs.

Lines in the DLGs are less detailed than their 1:25,000 counterparts. These differences are not considered 'errors'.

Actual errors were noted and corrected. For example, braided streams and wetlands were sometimes incorrectly coded as ponds. Edges where two blocks of 32 quads met (a USGS defined unit of production) often did not match. In these cases, streams and ponds were digitized or moved as needed to complete the edgematching process.

MassGIS attributed most of the ponds with a PALIS ID in the polygon attribute table . The Department of Fish and Game (DFG) GIS program attributed the named streams in the line layer with a SARIS ID with some additions to the PALIS ID in the polygon layer . Additional streams and ponds under study by the Division of Fisheries and Wildlife biologists which were not present in the 100k coverage were pulled from the 25k hydro data layer and attributed appropriately. In cases of a perched wetland, where the stream appeared to be connected to two river systems because the arc was continuous through the wetland, the DFG GIS program removed a tiny sliver of arc. In this way when the streams are plotted they would appear to flow out towards the major tributary. In the polygon layer where the feature is labeled a double-lined stream the SARIS_ID is being used as the PALIS_ID. This enables the stream to be shaded in rather than just outlined.

In the February 2013 update, island polygons (TYPE = "I") were removed from the polygon layer. The NAME field was added to the line layer and populated using the SARIS_ID joined to the HYDRO_SARIS_LOOKUP table of IDs and names. Some linework without a SARID ID was named using the annotation features.

The arc layer contains the following fields: The ponds/lakes feature name and PALIS_ID were obtained from the UMass Water Resources Research Center. Additional ponds/lakes feature names and PALIS_IDs were obtained from the Division of Fisheries and Wildlife. The SARIS_ID was obtained from the Massachusetts Stream Classification Program, PART I: Inventory of Rivers and Streams (publication #14380-139-150-3-86-CR). A complete listing of stream names and their SARIS IDs can be found in the table HYDRO_SARIS_LOOKUP. A complete listing of pond/lake names and their PALIS IDs can be found in the HYDRO_PALIS_LOOKUP table.

Names of ponds and streams have been added for cartographic display purposes. There are approximately 6,000 names, taken from the USGS 1:25,000 quads. In map units, the letters are 450 feet high (roughly 137 meters), which makes the annotation useful for output scales ranging from 1:50,000 to 1:100,000. The annotation is stored in two ArcSDE layers: MAJPOND_ANNO_POND contains the pond and lake names, and MAJSTRM_ANNO_STRM contains the stream and river names. The annotation layers are distributed in an ArcGIS 10 file geodatabase in the download file at the top of this page.