These datalayers represent place names for geographic features, which may be used for map labels.

These datalayers represent place names for geographic features, which may be used for map labels. They are grouped into three categories and stored in three geodatabase annotation feature classes (listed in parentheses): 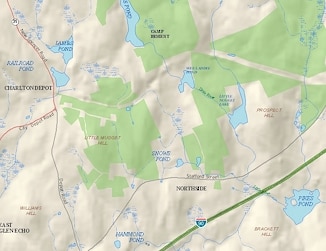 Those features considered as hypsographic features or place names were then converted into annotation and added to older geonames annotation feature classes and modified for size and placement.

In the MassGIS Data Viewer all three geodatabase annotation feature classes are accessible from this Viewer menu choice:

The colors and fonts of the annotation are properties of the feature classes and are normally preserved when displayed in software like ArcGIS. For GIS users who cannot work with geodatabase annotation, MassGIS has produced line and point shapefiles that contain the text string attributes of the annotation. The shapefiles may be added to a data/map view and labeled, but the features themselves would be set to display with no color and size. As an example, the hydrography "annotation" line shapefile would be labeled, and the features (the lines) displayed transparently, along with the 1:25,000 Hydrography layer. The following graphic provides an illustration:

The MassDEP GIS Group and MassGIS maintain the data. In March 2013 MassGIS replaced the data downloads to update a hydrographic feature (pond) name in Plymouth. The Medford Hillside label in PLACES was moved in August 2013.