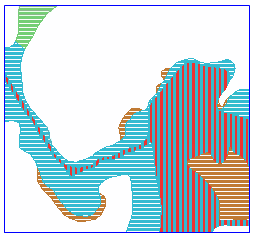 These data represent a subset of the data available on the paper Flood Insurance Rate Maps (FIRM) as provided by the Federal Emergency Management Agency (FEMA). The Q3 flood data were developed to support floodplain management and planning activities but do not replace the official paper FIRMs. These data are not suitable for engineering applications or site work nor can the data be used to determine absolute delineation of flood boundaries. Instead the data should be used to portray zones of uncertainty and possible risks associated with flooding. All counties except Franklin are available for Massachusetts.

In ArcSDE the layer is named Q3FLOOD_POLY.

A subset of this layer, created by MassGIS in October 2013 and named Q3FLOOD_POLY_NO_NFHL, includes data only for areas for which the newer National Flood Hazard Layer are not available. This allows one to display all flood zone data that has been developed for the state.

FEMA created the Q3 Flood data by scanning current FIRM paper maps and vectorizing the data. Though the scales of the map sheets vary and the original paper FIRMs contain no horizontal control, the data do have horizontal control consistent with 1:24,000 maps. This was accomplished by fitting the flood data to a USGS quadrangle. Edgematching, overlaps and underlaps in data and other problems were not corrected during the conversion process. The data were received from FEMA as ARC/INFO export files which were processed by MassGIS and incorporated into the data library. While FEMA intends to perform bi-annual review of data, the user is advised to confirm that the digital data does indeed represent the most current FIRM.

The attributes for the datalayer have been minimally modified by the addition of the item COUNTY. All other items are as supplied by FEMA. The FEMA-generated metafiles (included in this layer's download file - link at the top of this page) contain detailed descriptions of all fields.

The polygon attribute table has the following structure:

The datalayer is managed by MassGIS but no effort has been or will be made to correct data discrepancies. FEMA does not recommend the alteration of the data. As a final reminder, these data do not replace the paper FIRMs which remain the official documents.

For complete metadata (documentation), refer to the documents included in this layer's download file, or see these Web pages:

FEMA and the state's Department of Conservation and Recreation have partnered for FEMA Flood Map Modernization.
In June, 2007, a revised version was added to MassGIS' ArcSDE database: the layer was dissolved on all items to remove boundaries based on the original USGS quad index. At this time a new statewide shapefile was posted to the ftp site and download by USGS quad tile was discontinued.

The Q3FLOOD_POLY_NO_NFHL feature class was updated on January 8, 2015, to remove data from Barnstable and Nantucket counties that had been superseded by the NFHL data.