This layer depicts the seven sole source aquifers (SSA) in Massachusetts. An SSA is an aquifer designated by the U.S. Environmental Protection Agency as the 'sole or principal source' of drinking water for a given aquifer service area. 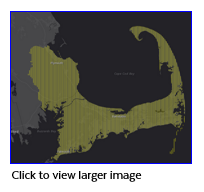 The SSA protection program is authorized by section 1424(e) of the Safe Drinking Water Act of 1974 (Public Law 93-523, 42 U.S.C. 300 et seq.). This program is designed to protect drinking water supplies in areas with few or no alternative sources to the ground water resource, and where, if contamination occurred, using an alternative source would be extremely expensive. EPA defines a sole or principal source aquifer as an aquifer that supplies at least 50 percent of the drinking water consumed in the area overlying the aquifer. These areas may have no alternative drinking water source(s) that could physically, legally and economically supply all those who depend on the aquifer for drinking water. For convenience, all designated sole or principal source aquifers are referred to as "sole source aquifers."

The SSA designation protects an area's ground water resource by requiring EPA to review certain proposed projects within the designated area. All proposed projects receiving federal funds are subject to review to ensure that they do not endanger the water source. Information on sole source aquifers is widely used in assessments under the National Environmental Policy Act and at the state and local level. A national SSA geospatial data set is available through Data.gov for use by government agencies, private organizations, and the public. MassGIS extracted the data for Massachusetts from the national layer, projected it to the NAD 1983 Mass. State Plane Mainland Meters coordinate system, and modified the attribute table.

The layer is named AQSOLE_POLY.

This datalayer's polygon attribute table has the following fields:

The U.S. EPA, Office of Water maintains this datalayer. MassGIS will download updates as needed. The September 2020 update replaced an older version of the data.