This Designated Shellfish Growing Area (DSGA) datalayer was compiled by the Department of Fish and Game's (DFG) Division of Marine Fisheries (DMF). Three hundred four growing areas in Massachusetts have been designated by DMF's Shellfish Project. 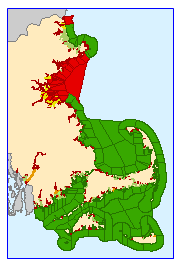 The Designated Shellfish Growing Area (DSGA) datalayer was compiled by the Department of Fish and Game's (DFG) Division of Marine Fisheries (DMF). Three hundred four growing areas in Massachusetts have been designated by DMF's Shellfish Project.

In ArcSDE the DSGA data are stored in a polygon feature class named DSGA_POLY.

The growing areas and their classification areas were defined by DMF shellfish project biologists. Compilation base maps covering the entire coast and islands were plotted at 1:5,000 using 1:5,000 Color Ortho Imagery and 1:24,000 USGS Topographic maps, all modified and enhanced by MassGIS. In addition, town boundaries, the territorial waters line and roads were plotted on these base maps. Shellfish project biologists compiled area boundaries onto the base maps, and these boundaries were then digitized or constructed using existing hydrography, town or territorial sea lines by DMF GIS personnel. Check plots were created and boundaries QA/QC'd by the biologists.

Separate 11 x 17 color plots are produced for each growing area based on the map extent of the area and its sampling stations. Classification area lines which need to be added, moved or deleted are compiled on these plots and automated by DMF GIS staff. A new 11 x 17 is produced and kept on file until another area change occurs.

The polygon attribute table has the following attributes associated with each polygon:

MarineFisheries’ sanitary classifications of shellfish growing areas are in accordance with the National Shellfish Sanitation Program. They do not indicate the current status, either “open” or “closed” to harvesting, due to shellfish management or public health reasons. Always confirm the status with local authorities and/or MarineFisheries.

Historical information about each area is maintained, beginning January 1, 1995. In addition, area information is also associated with water quality and marine biotoxin sampling data collected by shellfish project biologists, used to manage the areas. A separate GIS datalayer called Shellfish Sampling Stations has been created to maintain the sampling points.

The Division of Marine Fisheries and MassGIS are maintaining this datalayer. With the October 2009 update the lines feature class DSGA_ARC was dropped. Also see Shellfish Suitability Areas datalayer description.