MassGIS has processed a portion of the U.S. Census Bureau's 2010 data release for Massachusetts in order to assist GIS users who may need access to these demographic-related datasets. These data are only suitable for use with Census 2010 products and should NOT be linked to geography or tables from the Census 2000 release.

Available from MassGIS are the following: 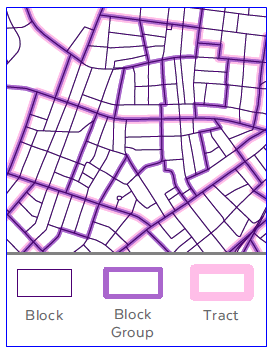 Census geographic areas, or units, are used by the Bureau to collect and tabulate decennial census data. Three levels are available from MassGIS (with layer name in parentheses) in the following hierarchy:

For more information on 2010 Census geography, see the US Census data website.

MassGIS added the following fields to the above three datasets to facilitate joining to the tables listed below:

The PL-94-171 data were created for the purposes of redistricting and contain limited population and housing data. MassGIS distributes four tables for each of the three levels of geography (twelve tables in all) that store the following PL94-171 demographic data:

A more expansive and detailed set of demographic data than those included in the PL-94-171 data, the SF1 tables contain information on age, sex, households, families, relationship to householder, housing units, detailed race and Hispanic or Latino origin groups, and group quarters. MassGIS acquired and processed a subset of the Massachusetts data from SF1 into a more user-friendly format with more intuitive field names. For each level of geography are the following seven tables (21 tables in all):

In the list above, "geog_level" is a placeholder for the to the level of geography abbreviation used in the table names: "B" for Blocks, "BG" for Block Groups, and "CT" for Census Tracts.

MassGIS also distributes the full, unprocessed set of SF1 data for Massachusetts released by the Census Bureau. The seven tables above were chosen for additional processing because they generally contain the most widely used demographic data and, with the exception of the group quarters table, are comparable to the data data released in the SF3 dataset from the 2000 Census.

SF1 documentation is available at http://www.census.gov/prod/cen2010/doc/sf1.pdf.

Data.census.gov site is the new platform to access data and digital content from the U.S. Census Bureau, replacing other tools (e.g., American FactFinder).

American Community Survey (ACS) data may be downloaded from an Advanced Search. For example, narrow your search in the Browse Filters section:

You will need to format the table in order to join it to the associated geography. To continue with the example above: 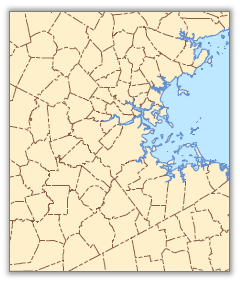 MassGIS created the Municipal Boundaries from Census 2010 polygon feature class by dissolving the Census 2010 Block data on the COUSUBFP10 (county subdivision) field. Community-based attributes such as town name, ID and population were then added. This dataset may be used as basemap data when mapping Census 2010 geography, as other municipal boundary layers from MassGIS will not line up exactly with the Census geography. The polygon layer, CENSUS2010TOWNS_POLY, was converted to line features to produce the polyline layer CENSUS2010TOWNS_ARC, and the OUTLINE field was then added and coded.

The layer's arc attribute table contains an item added called OUTLINE, which enables differentiation of line type (e.g. dashed lines inside the state and solid for the outside). OUTLINE codes are:
1 = Interstate boundaries
17 = Internal boundaries
4 = Coastline MassGIS created two water feature classes that may be used as basemap data when mapping Census 2010 geography, as other hydrography layers from MassGIS will not line up exactly with the Census geography. The polygon layer, CENSUS2010HYDRO_POLY, represents lakes and ponds. The features were selected from the Census Blocks (CENSUS2010BLOCKS_POLY) where ALAND10 = 0 and AWATER10 > 0. A few additional block polygons were added to this layer to maintain contiguity of water bodies, based on a visual check. Polygons were dissolved to remove any boundaries within a feature.

The polyline layer, CENSUS2010HYDRO_ARC, represents rivers and streams. The features were selected from 2010 TIGER linework where MTFCC is H1100, H3010 or H3020. Attributes include FULLNAME, the name of the river or stream (not all features are coded).

For the Blocks, Block Groups and Tracts, MassGIS projected the data acquired from the Census Bureau to the Massachusetts State Plane Mainland Meters coordinate system, and removed and/or clipped offshore polygons to match a reasonable expectation of the coastline, using the Survey Towns as a guide for selected clipping. Some blank fields were removed and the LOGPL94171, LOGSF1, LOGACS0610, POP100_RE, HU100_RE, AREA_SQFT and AREA_ACRES fields were added and populated. Unlike in the 2000 Census data, a single LOGRENCO field is not included in the geographic layers' attribute tables because each set of related data (PL-94-171, SF1, and ACS) store different values in their LOGRECNO fields.

On August 18th, 2011, the Census Bureau announced the availability of SF1 data for Massachusetts.  The SF1 data disseminated for Massachusetts are located here.  These data were acquired by MassGIS, along with a template Microsoft Access database (SF1 Access 2007 Shell) to import the data into, instructions on how to correctly perform the import process, and the technical documentation required to understand the content and structure of the data. The raw SF1 data files were linked to the Access 2007 template and a series of scripts and queries were executed to generate two sets of tables: (A) one set with user-friendly, re-named fields that corresponds to a subset of the demographics and aliases that MassGIS provided for the 2000 Census (see the 2000 Census Block Groups example, and (B) another set representing the entirety of SF1 demographics available for Massachusetts at specific geography levels.  The following is an inventory of the files produced by MassGIS:

The same alias field name was used when the description of the demographic attribute in Census 2000 SF3 was identical to Census 2010 SF1 (with the possible exception of attributes dependent upon the definition of “married couples” vs. “husband-wife couples”.  See each summary file’s technical documentation, the 2010 SF1 press_release, and this technical_note for further clarification.)  A lookup table of the MassGIS alias field names, original Census field names, and table names can be found in the spreadsheet SF1_2011_MGISfields.xlsIt is anticipated that the remaining tables from Census 2000 SF3 not represented by SF1 here can be re-created after the release of the 2006-2010 American Community Survey (ACS) 5-year estimates.

The tables in these databases are “segment tables”.  (See page 2 and 3 of the SF1 README file for an explanation of table segmentation)  A segment table contains the attributes of 1 or more of the demographics tables specified in SF1.  Each segment table name consists of a prefix added by MassGIS that identifies the geography level used to create it (BLK, BLKGRP, or TRCT) followed by “_Ma” (indicating it is data for the state of Massachusetts), followed by “000” (placeholders), followed by two digits (i.e. “02” or “41”) that denote the data file segment number, followed by “2010” (indicating the Census vintage year).  Segment table 45 is split into two parts in the Access database template provided by the Census Bureau.  The table “DATA_FIELD_DESCRIPTIONS” is a comprehensive listing of all attributes in SF1 and duplicates the information found in Chapter 6 of the technical documentation.  “Mageo2010” is a geographic header file, but should not be needed as MassGIS has already extracted the records associated with specific geographies.

To account for disparity in software versions among users and allow for greater accessibility to the data, the Access 2007 databases that MassGIS worked with during processing were converted to Access 2003 versions and are distributed as such. For users without a copy of MS Access, potential suitable alternatives to view, query, or otherwise further process the data include the Open Office Base product, or ESRI’s ArcGIS software.

The tables in each of the aforementioned databases all contain the field LOGRECNO which serves as the unique identifier for the purpose of linking to the various 2010 Census geographies provided by MassGIS.  Furthermore, most of the tables also contain a GEOID10 field added by MassGIS that represents a unique geographic  ID and is generated by a concatenation of constituent geography codes:

GEOID10 can also generally be used to link to the Census geography files instead of LOGRECNO, but the second set of databases containing all of the tables/attributes from SF1 do not have a GEOID10 field added to segment tables *_Ma000062010, *_Ma000112010, and *_Ma000382010 because they already contained the maximum number of fields allowable in an Access table.

For the TIGER roads, county-based datasets from the "all lines" version distributed by the Census Bureau were merged into a statewide layer and projected to the Massachusetts State Plane Mainland Meters coordinate system. The merge process yielded 183 pairs of segments that shared the same unique ID (roads that exist along county borders). One duplicate was eliminated from each pair. Only road feature types were included in this processing. Some fields were deleted and the fields LTOWN, RTOWN, L_TOWNID, R_TOWNID, L_BLKID10, and R_BLKID10 were added and populated.

For more details on these spatial layers and the associated tables listed above, see the metadata distributed with the data and:

If any problems or issues are found, please send e-mail to Dan Marrier at daniel.marrier@state.ma.us.