September 2020
This layer is the most accurate representation of Massachusetts' municipal (city and town) boundaries; this representation is based on the legislatively approved record of municipal boundaries. MassGIS recommends using this layer instead of the older, USGS-based Community Boundaries data. Authoritative determination of municipal boundary locations can only be provided by a licensed land surveyor. MassGIS regularly makes corrections or refinements to this data layer as information becomes available; the list of those changes is at the bottom of this web page. 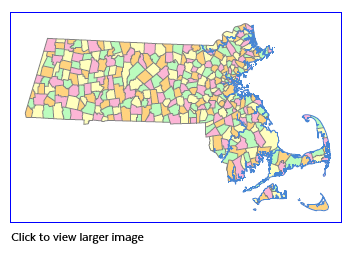 This political boundary datalayer has been created from latitude and longitude coordinates found in the 68-volume Harbor and Lands Commission Town Boundary Atlas. This Atlas series, and updates since it was published, describes the legal boundary for each of the 351 municipalities in Massachusetts. These coordinates were recorded from surveys of the location of each boundary marker around the periphery of each community. Each survey was tied into higher order monumented survey control points. The Atlases also include detailed descriptions of each community's boundary and location maps for each of the original boundary marker locations. The original surveys were conducted in the 1890s. The Atlas series was published in the early 1900s and has since been updated by the Survey Section of the Massachusetts Highway Department (now The Massachusetts Department of Transportation (MassDOT) - Highway Division) with changes as they are approved by the legislature.

When stored in geodatabase format, these four feature classes are organized in a feature dataset named TOWNSSURVEY, which includes the TOWNSSURVEY_Topology; rules have been created to enforce spatial relationships among the POLY, ARC and PT layers.

Two other feature classes are available that use the inland survey-based linework but have a generalized coastline for faster display. They are named TOWNSSURVEY_ARC_GENCOAST and TOWNSSURVEY_POLY_GENCOAST.

MassGIS staff collaborated closely with staff from the Survey Section during the development of this data layer. MassGIS staff keyed the coordinates into a database; that data entry was double-checked by staff from the Survey Section. Staff from the Survey Section then converted the latitude/longitude coordinates to the NAD83 datum and also created a version of the coordinates in state plane coordinates with units of meters. MassGIS used the state plane coordinates to "generate" points in ArcGIS.  Boundary arcs from the existing USGS-derived municipal boundary data layer were then snapped to the survey-derived points. The differences between the municipal boundary arcs digitized from those on the USGS quads and those created by snapping to the survey-derived coordinates are typically plus or minus 12 feet, although these differences are sometimes less and sometimes more. Some municipal boundary arcs (about 15% of the total) follow the edge of a road or rail right-of-way or a stream or river channel. In these cases, the new boundary arcs were "heads up" digitized based on features visible on the statewide 1:5,000 color orthos from imagery flown in 2001. How each boundary arc was developed is identified in the arc attributes, as described below. MassGIS first published these survey-based boundariues in June 2004.

According to staff from the Survey Section, based on their knowledge of historical surveying methods, of changes to the North American Datum at its various versions, and of the algorithms used to convert coordinates from one datum to another, the individual boundary marker coordinates are on average approximately plus/minus three feet. Some points may be more accurate than this and some points are definitely less. The information available in this data layer CANNOT be used to determine the definitive locations of either individual boundary markers or of a specific municipal boundary. Such determinations can only be made by a professional land surveyor. Note that as part of its assistance to surveyors, MassDOT makes available the coordinate information for the individual town boundary survey points that were the basis for this data layer on its Town Corners Map.

For communities with a coastal boundary, MassGIS collaborated with the Massachusetts Water Resources Authority and the Department of Environmental Protection to complete a 1:12,000 scale coastline.

Note that the 351 communities are the official municipal names, not including "villages" or other sections of towns. The Secretary of State's office has prepared a web page listing the Unincorporated and Unofficial Names of Massachusetts Communities. Also see the List of Town Numbers and Names and Towns Index Map.

MassGIS considers this the first release of this layer. Future work will consist of (1) improving the accuracy of boundaries identified as following a road right of way (see "Attributes" section below for description of BND_QUAL where attribute value = 2) and (2) adding offshore boundaries to the existing arc and polygon layers. The offshore boundaries are currently being reviewed by the legal counsels of the Massachusetts Highway Department and  NOAA as well as the Federal Baseline Committee. This data will not be distributed until the termination points of the offshore boundaries are approved by the Federal Baseline Committee and the Massachusetts Legislature.

This datalayer, except the coastline, was created by MassGIS. Boundaries for each community were created by adjusting the existing 1:25,000 scale boundaries to connect the survey points (TOWNSSURVEY_PT) of a community. In many areas, the boundary creation was simply a matter of "connecting the dots" from one boundary point to the next. Where boundaries follow a stream/river or road right-of-way (ROW) the boundary was approximately delineated using the 2001 Half Meter Color Orthophotography as a base. All boundaries that follow a water body or a ROW are coded in the attribute table in the BND_QUAL field.

The TOWNSSURVEY_POLYM layer was created by dissolving the TOWNSSURVEY_POLY feature class; a subset of the attribute table was retained, and the AREA and SQUARE_MILES fields were calculated for the entirety of each town.

The ArcGIS-added SHAPE_AREA field stores the polygon area in square meters; SHAPE_LEN is the polygon perimeter in meters.

The ArcGIS-added field SHAPE_LEN is the line's length in meters.

See the older Community Boundaries (Towns) layer for tables that may be joined to TOWNSSURVEY_POLY to display additional information at the municipal level.

To display just the "land area" of each town, use the definition query of COASTAL_POLY = 'NO' for the TOWNSSURVEY_POLY layer (this query is used in the themes in the MassGIS Data Viewer). For the TOWNSSURVEY_ARC layer, symbolizing on the OUTLINE field will allow for the display of coastline as well as inter-municipal boundaries in the water, where available. See the second image above for an example.

MassGIS maintains this datalayer. Future updates are described in the "Overview" section above. If you have questions or comments about these layers please contact MassGIS.