This layer is the Massachusetts coastline. MassGIS has modified the USGS 1:24,000 Hydrography Digital Line Graph (DLG) quadrangle files to produce the datalayer. 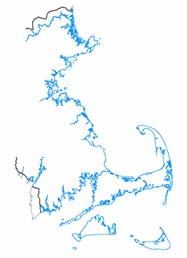 Checkplots were produced and compared to the paper 1:25,000 quads. Some digital quads were not available from the USGS at the time of production. Those quads were manually digitized. All quads were snapped to adjacent quads to ensure a continuous coastline.

To best serve the most users, the coastline was determined to end at the first dam from the mouth of a river. In the instances where no dam was evident on the DLGs, the coastal coverage was ended 4 quadrangles in from the shore. This technique was used for the Merrimack, Neponset and Taunton Rivers.