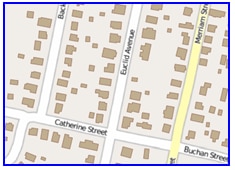 The features were initially interpreted by a contractor (Rolta) for the entire Commonwealth using color, 30 cm. DigitalGlobe ortho images obtained in 2011 and 2012, supplemented with LiDAR (Light Detection And Ranging) data collected from 2002 to 2011 for the eastern half of the state.

In 2019, MassGIS refreshed the data to a baseline of 2016 and continues to update features using newer aerial imagery that allows MassGIS staff to remove, modify and add structures to keep up with more current ground conditions. Structures from the original compilation that are removed are stored in an "archive" feature class for edit tracking and historical purposes. Also in 2019, MassGIS replaced the polygons in Boston with data from the city.

The roofprints as delivered by Rolta were enhanced by MassGIS using Normalized Digital Surface Models (NDSMs) derived from the same LiDAR data. Other layers were used, including the Standardized Parcels, to aid in review, especially where LiDAR data were not available. See the section "Roofprint Shifting" below for details on MassGIS' work to edit the roofprints. For information on other updates see the "Maintenance" section.

In ArcSDE the layer is named STRUCTURES_POLY.

Rolta created the polygons based on the 2011 and 2012 DigitalGlobe Ortho images (see Year of Photography Index PDF 1MB), the latest available orthos at the time, using LiDAR as a supplement to determine the shape of structures that were difficult to distinguish in the orthos. The data were saved in ESRI shapefile format and delivered to MassGIS for QA review, then processed to create the final deliverable. 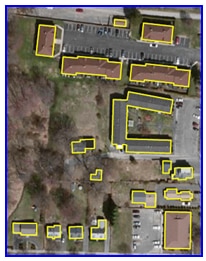 Criteria Used for Creating a Roofprint

The following is a summary of the guidelines used in creating roofprints (as described in the Request for Response for this project):

A roofprint is a map polygon, with real world coordinates, representing the perimeter outline as it appears in aerial imagery of every structure or portion of a structure which has a roof. Roofprints shall be mapped for all structures equal to or larger than 150 square feet including the following:

Features that do not have a roof covering usable areas, such as an open deck, the top surface of an electrical transmission or cell tower base, platforms for utility equipment, or other structures which do not have a usable “interior” or covered volume, shall not be interpreted for mapping. Also, vehicles, including truck trailers that are parked with or without a tractor attached, boats, airplanes, etc. should not be mapped. However, trailers with any kind of residential or business use such as temporary classrooms, construction site field offices and the like must be captured.

Greenhouses were generally considered not structures, unless attached to a roofed structure. Roofed dugouts of sufficient size were also included as structures. Tanks and covered reservoirs and pools with temporary covers were not considered structures.

Polygon creation had the following guidelines:

The interpretation error rate was less than 0.5%, conformance to this standard was determined as follows:

For each of the six delivery areas, MassGIS selected tiles randomly (using a ‘randomizing’ spreadsheet created within MassGIS) from the 2008/2009 ortho imagery. Tiles were selected until the total number of structures in the selected area exceeded 15,000. The roof outlines in the selected tiles were then reviewed against the DigitalGlobe imagery. Additional layers were used to supplement the review, including the LiDAR datasets, and the Level 3 Parcel dataset, especially where LiDAR data were not available.

The combined error rate forinterpretation was calculated to be Eo + Ec.

Elevated objects such as roof outlines in aerial imagery may appear displaced with respect to the base of the structure. In order to minimize or eliminate the effects of such displacement (often referred to as "building lean"), MassGIS undertook several automated processing steps to shift roofprint polygons as delivered by Rolta. Building lean effect may cause some buildings to cross over into adjacent parcels or overlap other features such as streets and water bodies. The shifting process was performed only in areas where MassGIS' LiDAR Terrain Data were available (Eastern Mass. inside of I-495; for details see the section "Adjustment Method" below). As a result, many of the shifted polygons better approximate building footprints.

Ortho image data layers are really mosaics made up of portions of many overlapping aerial photo frames. The yellow lines represent the seam lines of these photos: 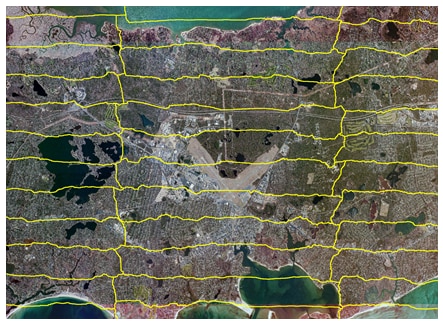 If a building is close to the principal point, the roof and base will appear to coincide (the base and sides of the building will not be visible; note the 26-story JFK Federal Building in Boston, at left in the image below): 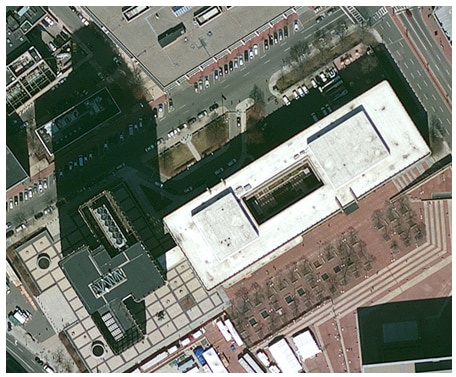 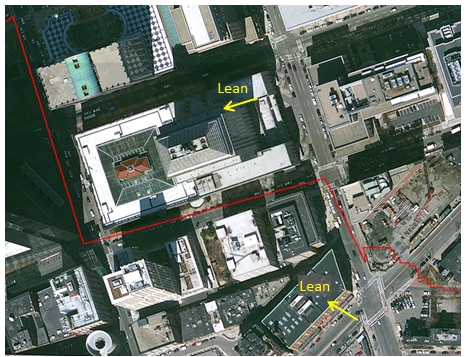 The magnitude of lean can be determined by:

Where H is the camera height, h is the building height, D is the distance of the building from the principal point.

The average height of each building has been obtained from a LiDAR Normalized Difference Surface Model (NDSM). This raster is the difference between the LiDAR last-return elevations, and the LiDAR model of the ground.

It was assumed that the location of each principal point is at the mean center of each seam polygon, and that the aircraft altitude is 5,000 meters. 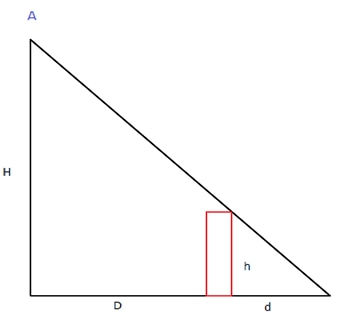 The lean also has a direction, so polygons representing "roofprints" have been moved a distance d in a direction opposite to the apparent displacement in the photo. [Manageable processing areas were determined based on the intersections of these regions.]

For each LiDAR project area, all LiDAR returns were filtered to create two ArcGIS Terrains:

These Terrains were then linearly interpolated to two 1.0 meter rasters. Finally, the Bare-Earth raster was subtracted from the Last Return raster, resulting in a Normalized Difference Surface Model (NDSM).

NDSMs were cut into smaller subimages (tiles) using the seam polygons for the corresponding area.

4. Seam center points were determined for each seam polygon.

A model was developed in Trimble eCognition Developer 8.7.2 and run on eCognition Server that determined the distance and direction from each roofprint centroid to the tile's seam center, as well as the mean height the building. Output was a point shapefile.

An ArcGIS Toolbox script that prepared the output points and roofprints for rectification was run, followed by an ArcGIS Python script that created a dataset of shifted roofprint polygons.

The two sets of shifted roofprints in overlapping processing areas were examined, and where there were differences, the roofprints with the more accurate shift were kept.

Roofprints straddling seam lines usually contain two (or more) points with different values for angle and distance. These roofprints were generally not moved, but were coded TOUCH_SEAM = 1 so they could be tracked after processing.

Sources of possible error in the shifting process include:

Situations which may cause the roofprint to shift more or less than it should:

In a small number of cases, the shifting process caused some polygons to overlap others. These were found using ArcGIS topology and the polygons were moved manually so that no overlaps were present. Once the shifting process was complete, the shifted polygons replaced those in a copy of the original Rolta deliverable. The version of the Structures dataset distributed by MassGIS, therefore, is a hybrid of as-delivered polygons and those shifted by MassGIS. Finally, MassGIS took the hybrid layer and performed an Identity operation with the Survey-based Communities layer to populate the TOWN_ID fields.

Polygons in this layer contain the following fields, all added by MassGIS:

In February 2019, MassGIS completed a comprehensive update to the Building Structures layer, capturing changes observed from the original vintage of the dataset (2011/2012) through the summer of 2016. This update was necessary to establish a reasonably reliable baseline for statewide tracking of year-over-year development going forward. Intermittent updates prior to this effort had been conducted on a subset of towns over time and sometimes discovered structures missing from the original creation of the data layer. The resulting patchwork of previous updates had limited ability to provide reliable information about new development annually.

The project to create an updated comprehensive baseline for structure updates began in March 2018. MassGIS staff conducted a complete visual scan was for every town with the exception of Boston (which maintains its own structures data), recording significant differences between the existing structures polygon layer and structures visible (or no longer visible) in ortho imagery compiled through August of 2016. Observed structures greater than 150 sq. ft. that were missing from the layer were added, and structures present in 2011/2012 that had been torn down and not rebuilt were archived and removed from the data layer. Additionally, existing structure polygons were modified if the building roofprint area had changed by 25% or more, or if the shape was notably different. Modifications to existing structure polygons were achieved by archiving the original polygon and digitizing a new feature instead of reshaping existing polygons so an historical record of change could be developed and maintained.

Although every part of the state was visually scanned (billions of square meters), special focus was applied where structure change was indicated from some other source. These sources included:

While the update process captured the vast majority of all missing structures greater than 150 sq. ft. that existed through the first half of 2016, some structures inevitably escaped being recorded. The pilot for this project included a second visual scan of each town. A second pass consistently identified even more missing structures in the pilot phase, reflecting the difficulty of efficient comprehensive photointerpretation over large areas. However, this additional review was excluded from the full-scale project because of staffing and time constraints. In addition, a comparison of Microsoft’s recently published nationwide structure layer to the updated MassGIS structures layer has revealed potential structures not represented in either the existing or archived MassGIS structure polygons. The locations of these potentially missing structure polygons will be reviewed in the next update to capture 2016-2017 structure changes. It should be noted that while there are thousands of candidate structures to review in the Microsoft data that are not in the MassGIS data, there are hundreds of thousands of verified structures in the MassGIS data that are not in the Microsoft data, so it is uncertain how many of these candidates will yield true missing buildings.

2016 Google Imagery was the primary structure identification/validation source for this project. Where Google 2016 data was not available, such as in the western part of the state, other sources were used, including Google imagery from 2015 or 2014. Imagery sources are listed in Table 1:

The SOURCEDATE field in the structure polygon attributes indicates the vintage of the imagery source used to visually validate and confirm the existence of a building. It is recorded in YYYYMMDD format. If the month and/or day of a given imagery source’s vintage is unknown, they are replaced with values of “00” respectively. I.E. if it is only known that the imagery used for a given building’s identification was acquired in 2016, the SOURCEDATE field will contain a value of “20160000”. 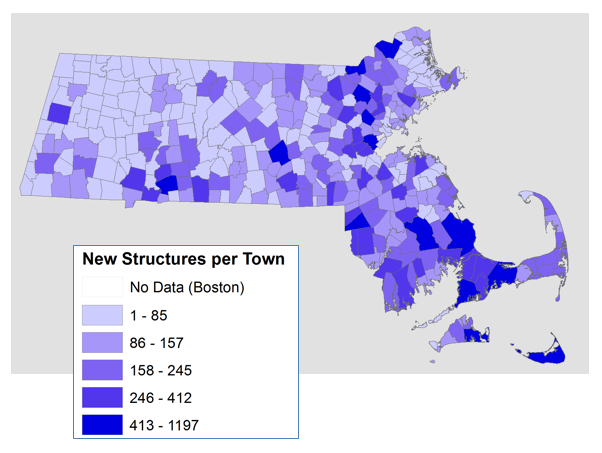 Map showing the number of new structure polygons by town. 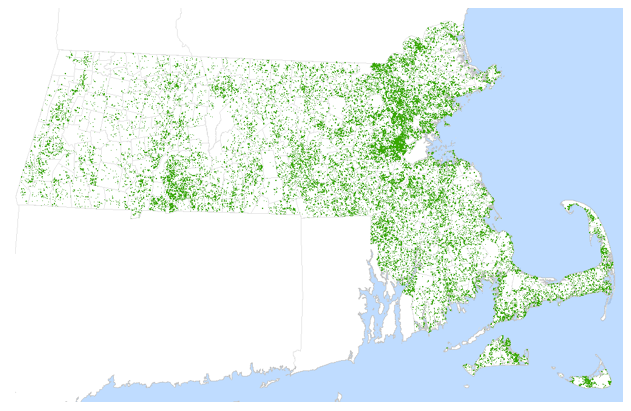 New structure polygons, visible in green above, may represent real new construction, building modifications, teardowns and rebuilds, or structures that were missing from the original 2011 data set. The images above do not include Boston.

In August 2019 MassGIS replaced the original Rolta-produced Boston structure polygons with those obtained from the City of Boston in March 2019. The city's data are more current and slightly more precise. MassGIS also added a few large structures built recently that were not in the Boston data.