This statewide dataset contains a combination of land cover mapping from 2016 aerial imagery and land use derived from standardized assessor parcel information for Massachusetts.

Each location in this layer is associated with a land cover class value as well as a parcel use code. 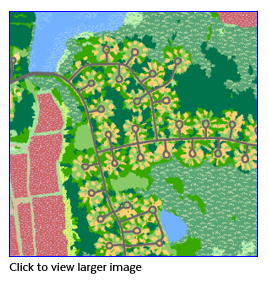 Although both land cover and land use information are included, each of these aspects can be accessed independently, or in interesting and useful combinations with one another. For instance, a user can simply display impervious surfaces (land cover), or commercial parcels (land use). In combination, it is possible to display and measure the portions of the commercial parcels that are covered by impervious surfaces or the portions of residential parcels used as developed open space.

This layer is the result of a cooperative project between MassGIS and the National Oceanic and Atmospheric Administration’s (NOAA) Office of Coastal Management (OCM). Funding was provided by the Mass. Executive Office of Energy and Environmental Affairs.

This land cover/land use dataset does not conform to the classification schemes or polygon delineation of previous land use data from MassGIS (1951-1999; 2005).

MassGIS stores the data as a single statewide polygon feature class named LANDCOVER_LANDUSE_POLY in the spatial reference of NAD_1983_Contiguous_USA_Albers (EPSG: 5070).

The following sections describe the development and features of the two components, land cover and land use, as well as the final combined dataset.

The thematic land cover dataset was created in raster format by NOAA's Coastal Change Analysis Program (C-CAP). C-CAP has produced numerous standardized land cover products which are included in the National Land Cover Database. These products are used in numerous ways to assess urban growth, inventory wetlands, coastal intertidal areas, and adjacent uplands, and delineate wildlife habitat to monitor changes in these areas. This information helps in the understanding of the landscape's response to natural and human-caused changes. 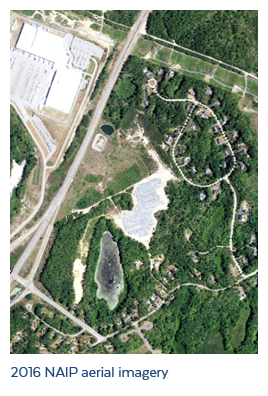 OCM worked in close coordination with MassGIS to produce the land cover. OCM delivered the data to MassGIS in an Albers projection. 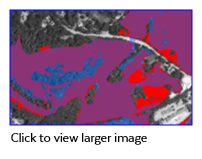 The wetlands in the final land cover product are exclusively from the C-CAP program, derived through a modeling process which used ancillary data such as Soils (SSURGO), the National Wetlands Inventory (NWI) and topographic derivatives, and in many locations will differ from the MassDEP Wetlands data.

The land use component of the data layer is represented by the Property Type Classification Code associated with each parcel in MassGIS' Standardized "Level 3" Parcels layer. These "use codes" come from the Mass. Department of Revenue Division of Local Services (DLS), along with custom use codes some municipalities include in their parcel data.

For this project, MassGIS created a parcel layer using data deliverables as close as possible to the time of the 2016 NAIP imagery used for the land cover. Since parcel data complying with Level 3 of the MassGIS standard was not available from every municipality for the year 2016, some information was selected from a different year to use data as close to 2016 as possible, with the following rules:

MassGIS merged these parcel data into one feature class and dissolved them based on these fields:

For efficient processing and distribution, MassGIS split up the statewide land cover raster into 291 smaller, regularly sized and spaced tiles, each 10km by 10km (10,000 x 10,000 pixels).

The Create Fishnet tool produced a polygon index that precisely fit the tiles. The tiles were identified with a TILENAME value based on row and column position. For example, TILENAME “R07C17” identifies the tile in row 7, column 17. The index is named LANDCOVER_USE_INDEX_POLY. Aside from TILENAME, the other field is SHP_LINK, which stores a link to download a zipped land cover-land use shapefile for each tile.

In order to match the data model of the land use ahead of combining the two datasets, each land cover image was converted to a polygon shapefile ("vectorization") using a Raster to Shapefile model in ERDAS IMAGINE. This method preserves the thematic attributes and simplifies the polygons very slightly.

MassGIS carried out the following steps in ArcGIS 10.6.1:

The Identity created numerous very small polygons because the two components (land cover and land use) were not spatially correlated. To preserve the input data, MassGIS decided not to eliminate polygons or perform any other cartographic refinement at this point. Users can easily perform these operations if desired.

The fields in the final land cover-land use data are:

See the C-CAP table above for a list of the COVERNAME and COVERCODE values. The generalized use codes are as follows: 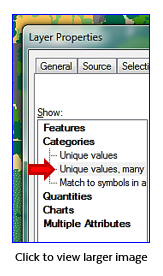 MassGIS includes a layer file for use in ArcMap 10.4+ and ArcGIS Pro with each download. (Users will need to apply the symbology or reset the data source for each download.) The LYR uses the 'Unique values, many fields' option with COVERCODE and USEGENCODE and symbolizes all impervious polygons (COVERCODE = 2) based on their generalized use code; all non-impervious land cover polygons are symbolized by their land cover category. The idea behind this method is to use both cover and use codes to provide a truer picture of how land is being used: parcel use codes may indicate allowed or assessed, not actual use; land cover alone (especially impervious) does not indicate actual use.

Using USE_CODE for symbology is another option. For example, polygons representing cranberry bogs (with standard USE_CODE of 270 or 710) could be selected and displayed with their own symbol. Be aware, though, that some municipalities may not use these standard codes, and features like cranberry bogs may appear to stop abruptly at the town line. 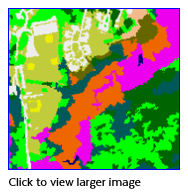 Users, however, may choose to display the data on only land cover, or just by parcel use code, with any custom symbology. NOAA presents the land cover data with its C-CAP classes. MassGIS also distributes an ArcGIS layer file symbolizing the data on the land cover name (COVERNAME) field, using the C-CAP raster colormap symbols. Downloaded this layer file here: LandCover_LandUse_2016_CCAP.lyr (apply to data or reset the data source) 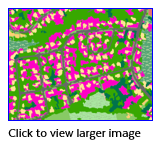 Specific combinations of land cover and land use categories may be queried for analysis and display. For example, users may want to determine the amount of lawns (open space developed, from land cover) on single family residential parcels by using a definition query of 'COVERCODE = 5 AND USEGENCODE = 11'.