March 2000
These black and white orthophotos were captured over the course of the 1990's and represent the earliest orthophoto that MassGIS has. 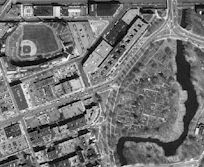 These medium resolution images provide a high-quality "basemap" for the Commonwealth. As of March 31, 2000, the entire state is available. The imagery was captured during the spring from 1992 through 1999. View the Status Map  .

There are five kinds of data associated with this project. The first is the digital black and white orthophotos themselves, available in four resolutions (half-, 1-, 2- and 5-meter). The second is 3 meter contours generated from Digital Terrain Models (DTMs) developed as part of the production process for the orthophotos. The third and fourth are point elevation coverages and breaklines , produced during the 3 meter contour generation process. The fifth is  annotation  based on the USGS GEONAMES datalayer (see individual description pages for details regarding these four data layers).  All of these layers are tiled with the 4000 x 4000 meter NAD83 Orthophoto Index Grid.  The naming convention for these layers as exported includes the ID of the index grid sheet prefixed by an "hp" for contour, a "p" for points, an "l" for breaklines, or an "a" for annotation. The half-meter images use only the ID of the index grid sheet for a file name; the other resolutions use "1_", "2_", and "5_" followed by the index ID. The Grid ID is the first 3 digits of the xy coordinate pair for the lower right corner of each cell.

Stereoscopic aerial photography with 80% forward and 40% side overlap was collected along flight lines running approximately north/south during spring "leaves off" periods at a flying height of 15,000 ft. with a 6 inch mapping camera with forward motion compensation. The scale of the photography is therefore 1:30,000.

Ground control targets were set out prior to the flight and photo recognizable points were substituted for targets that were lost. Horizontal control (referenced to NAD83) conforms to the Federal Geodetic Control Committee specifications for Second Order Class 2 GPS surveys. Vertical control (referenced to NAVD88) is within 10 cm. It is tied to second order Class II NGRS benchmarks. In addition the latitude, longitude and ellipsoidal heights of continuously operating GPS reference stations were incorporated into the control adjustment. Orthometric heights were directly measured or estimated from GPS derived ellipsoidal heights.

Aerial Triangulation (AT) block models were developed and tested for accuracy. Adjacent blocks are tied to new ones to insure a "seamless" image. These reports are on file at the State Archives.

DTM data points were collected on analytical stereoplotters at a sufficient density to support generation of 3 meter contours conforming to the National Map Accuracy Standards (+ or - 1.5 meters). Mass points were collected along parallel scan lines 75 meters apart at variable density as a function of the topography and other ground features. Spot elevations at summits and in depressions and breaklines along significant linear features were also collected. Distinctions between "hard" and "soft" breaklines were established and standardized to facilitate the generation of contours.

The photography was scanned at 15 microns and the images were differentially rectified using the DTMs and the AT block models. The histogram for tonal adjustment provides for a range of gray shades from 30 to 225 (out of 256), thus allowing pure black and white to be legible when over plotted on the images. Accuracy of the image was given precedence over tonal consistency at the edges of the images. The final digital images were clipped with the Orthophoto Index Grid, thus the tiles do not overlap. The images meet or exceed the National Map Accuracy Standards to the extent that 90% of the well defined features fall within 0.5mm of their true position on the ground at the nominal output scale of 1:5,000 (2.5m on the ground). Additionally, the maximum displacement of well defined features is less than 5 meters. Each pixel in the digital orthophoto image represents 0.5 meters on the ground.

Each tile contains 8,000 x 8,000 pixels which equates with a file of 64 megabytes (mb). These images have been resampled at 1 (16 mb), 2 (4 mb) and 5 (640 kb) meter resolutions. The half-meter images are stored in .BIL format with associated .HDR files. The resampled images are in tiff format with an associated .tfw world file for georeferencing. The resampling process was performed in the ARC/INFO GRID module. MassGIS also distributes the half-meter and one-meter orthos in the MrSID format as individual tiles, and the one-meter orthos as 10 large MrSID mosaics  All image acquisition and processing was performed by Intermap Technologies.

There are no attributes for the images. Each pixel is coded with a gray-shade value ranging from 30-225.

Please note that MassGIS does not have any old aerial photographs (pre-1992). For information on such products please see